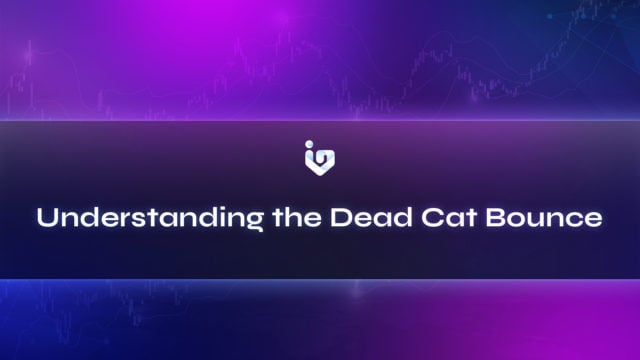 A dead cat bounce is a brief and insignificant recovery of stock prices, after a steep decline. Dead Cat Bounces are considered a continuation pattern in technical analysis. It may seem like a reversal at first glance, but it is just a retracement of the current trend. The phrase comes from the belief that even a dead cat would react to being dropped from a distance.

What Causes a Dead Cat Bounce?

Investors mistakenly think the price has dropped to its lowest point causing a brief rise in stock price brought on by them. Additionally, it could result from investors clearing short positions, thinking mistakenly that the bottom has been achieved, or searching for oversold assets. In the end, the dead cat bounce is not supported by fundamentals and the market quickly resumes its downturn.

Traders must grasp as much information as they can when trading with technical indicators. Dead Cat Bounce is one of the most common technical patterns you will encounter in your journey. As stated above, it’s a short relief rally followed by a downtrend. Traders that fully understand the concept use this as an advantage when shorting in the market. Moreover, it’s also beneficial for short-term traders to make profits from the short rally. This will allow them to earn potential profits, even on a downtrend!

It’s important to back suspicions on dead cat bounces with both technical and fundamental analysis. This is because the pattern cannot be identified with certainty until it is analyzed in hindsight. Traders must do due diligence and proper analysis to avoid getting mistaken. After all, no one can truly predict the bottom of the market.

Remember what we said about short relief rallies? A clear example of that statement can be seen in the chart of $BTC below. We can see a short rally that typically lasts a few days before plummeting down into its bearish direction.  A dead cat bounce normally only lasts a few days, though it might occasionally last for a few months.

Another example is the chart of $APT. From the onset, the coin was already in a downtrend which produced a dead cat bounce.

The biggest problem with the dead cat bounce is that it can only be accurately detected after it has happened. Analysts may attempt to predict it using statistical tools, but it is unlikely to be certain until enough time has passed. Until then, it is difficult to tell if an increase in the share price indicates just another counter-trend rally or the start of a stock recovery.

Traders can never really tell how long a dead cat bounce will last. It might happen anytime between a few days and several months. The challenge of correctly identifying one is made more challenging by the unpredictable nature of the price pattern.

A dead cat bounce is a brief increase in a securities or index’s price following a significant correction or downward trend. It is quite challenging for analysts and traders to distinguish them from a straightforward trend reversal because they are typically only seen after the fact. The opportunity is usually good for short-term traders, as it might allow them to generate profits from the short rally. Investors can start short positions on the security as a result of the incident.

Want to learn more lessons to help you build a crisis-proof system? Check out the Investa Summit 2022: Opportunities in Crisis! Our world-class and industry-leading speakers will be giving you in-depth experiences and lessons on the bear market we’re facing, and how we can find opportunities moving forward.