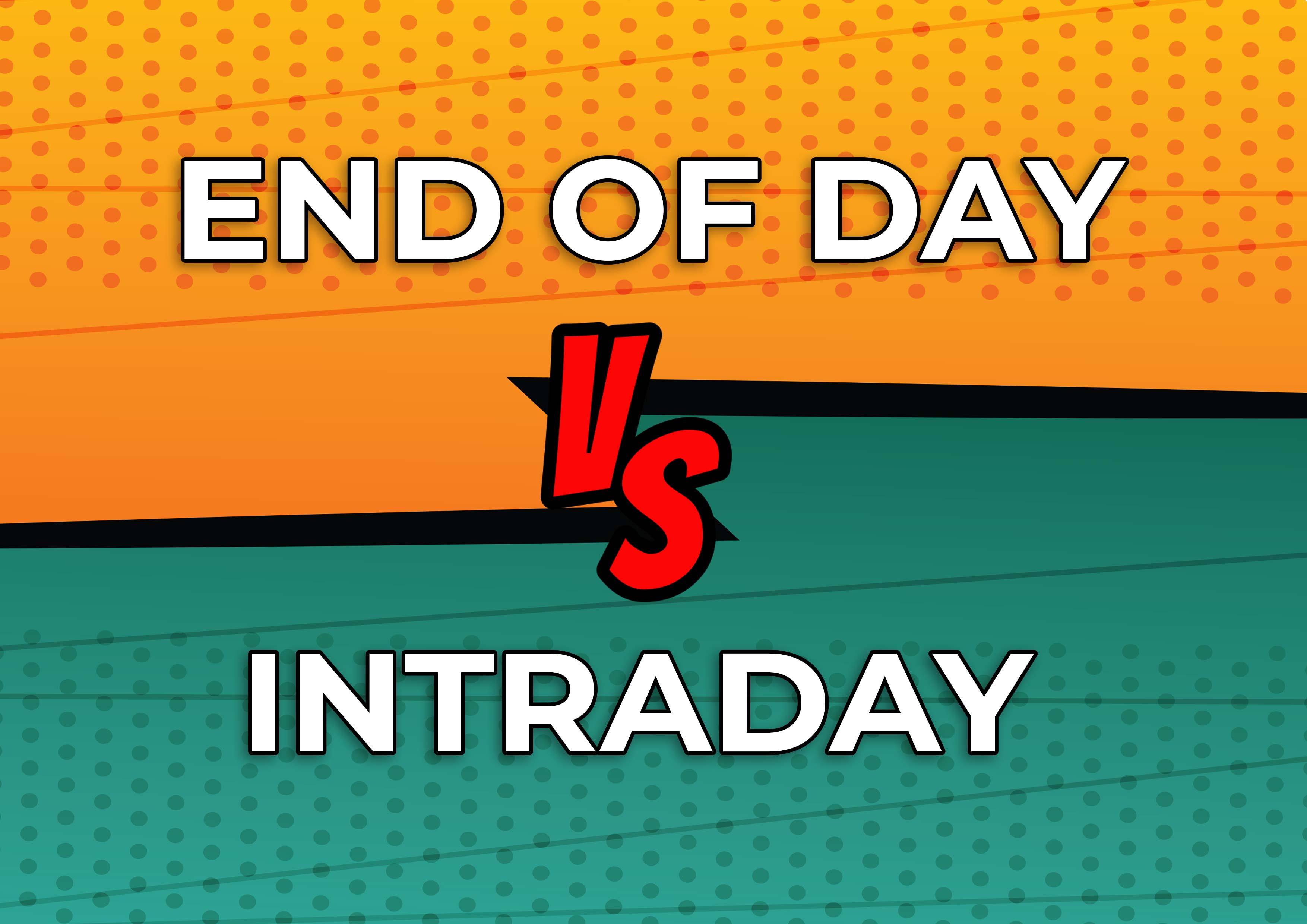 Well, it depends. End-Of-Day trading (also known as EOD trading) benefits those who are mostly consumed by their 9am-5pm jobs and students who are in class the whole day. On the other hand, Intraday trading benefits those who have a lot of time to themselves or those who can access the market at any time during the day. Both approaches have their advantages and disadvantages. To identify which approach to use, you will need to do an objective personal assessment of your personality and circumstance.

1. You get to enter strong breakouts at a good price that don’t give any pullbacks. 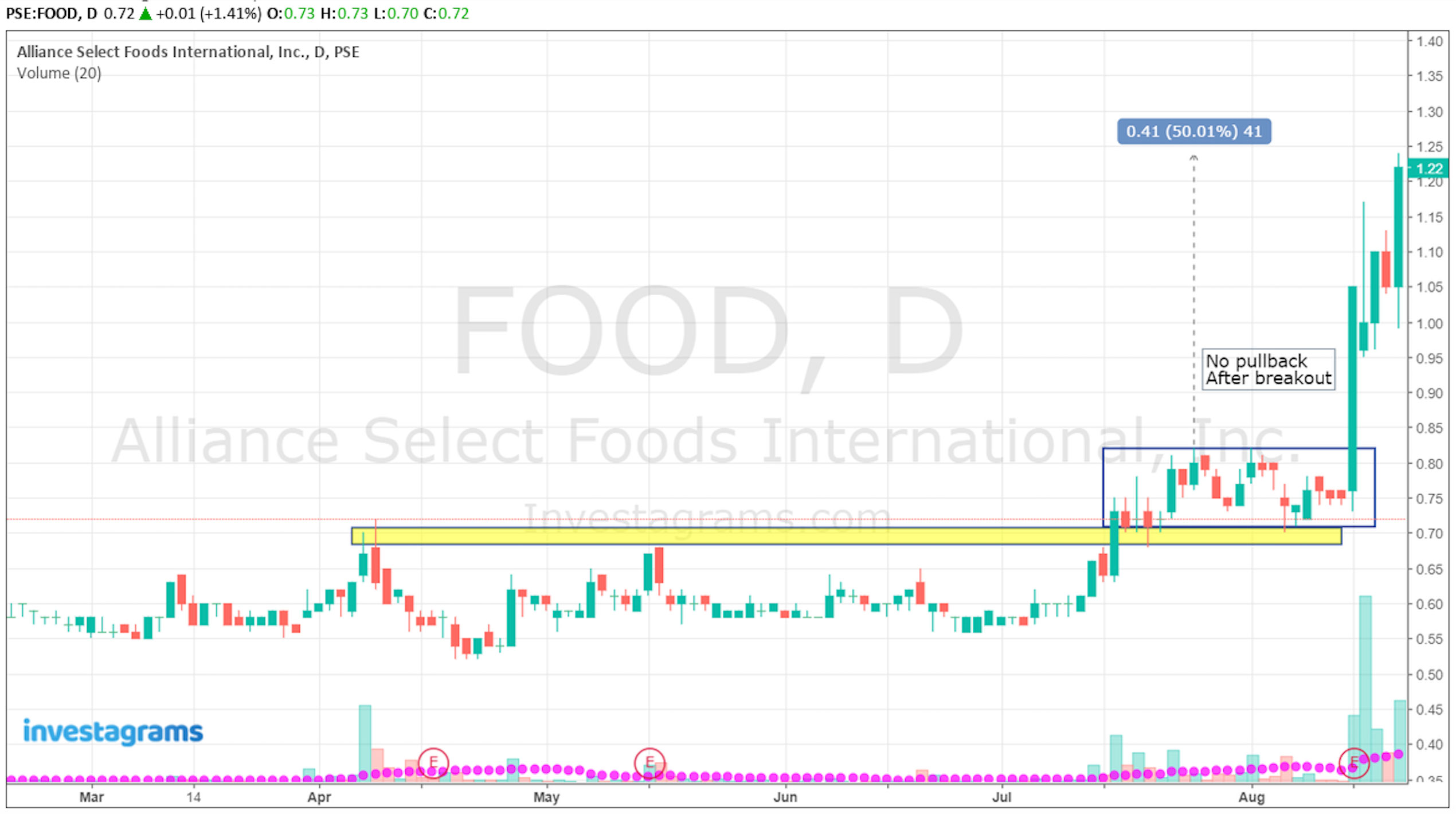 After breaking out of its consolidation, $FOOD (Alliance Select Foods International, Inc.) never looked back. It went up 50% from the breakout point without giving any pullbacks. If you waited for EOD to execute your buy order, $FOOD would already be up 28% from the buy point which is already too extended. If, however, you bought this during the time it broke out within the day, you would’ve been able to ride the move.

2. You can cut a position early in the day to avoid a major breakdown. 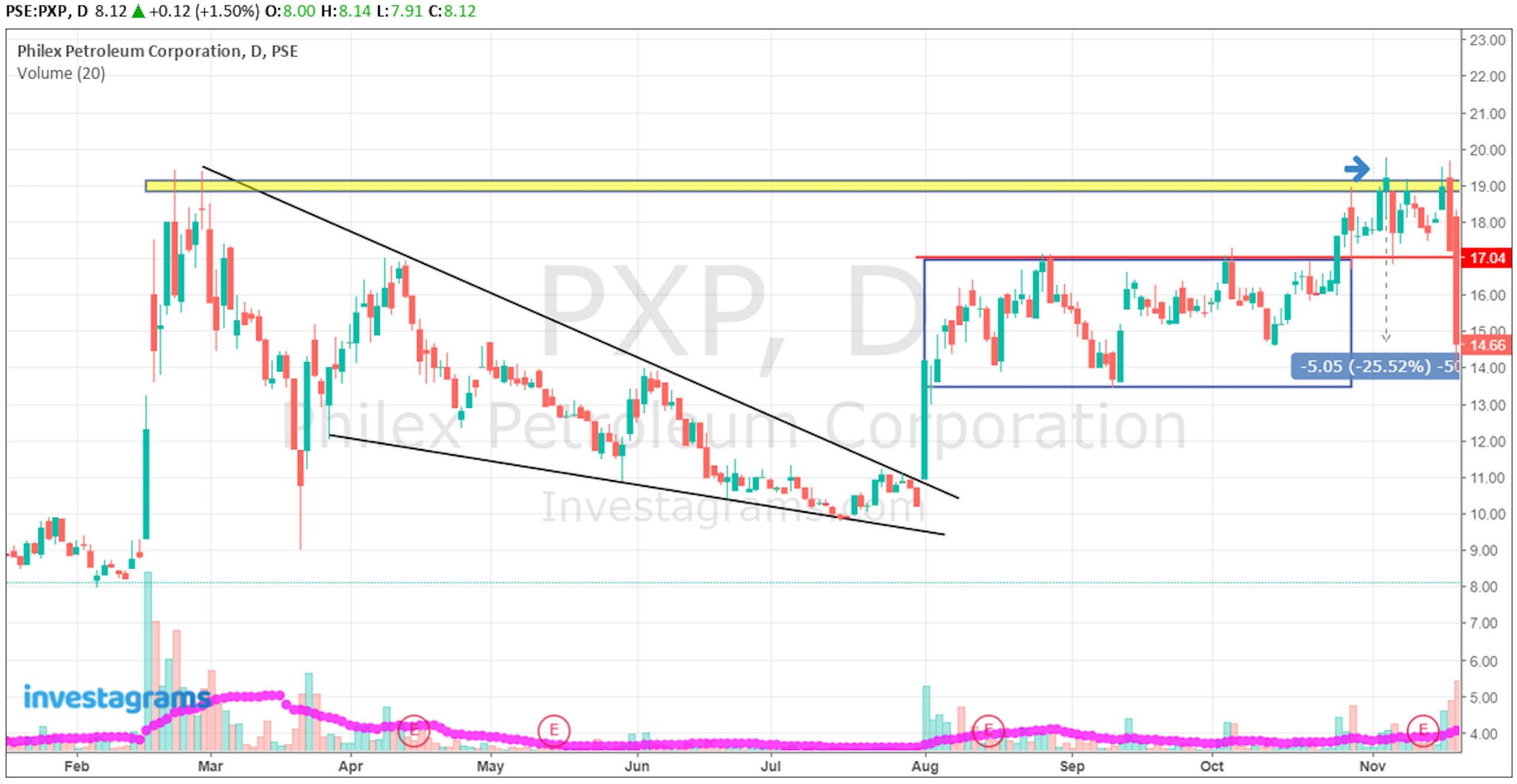 If you bought $PXP (PXP Energy Corporation) on the 19 pesos breakout, your stop would most likely be placed on a break below 17. I’m pretty sure many of us remember what happened to $PXP at this time, despite all the positive news the stock continued to breakdown. If you waited for EOD to execute your stop loss, you would’ve incurred a -25% loss! By selling your position once your stop is hit intraday, you remove the risk of suffering a major breakdown. Also, receiving alerts from InvestaWatcher is also a good way to avoid a sudden sell-down that requires nimble hands to save your capital. 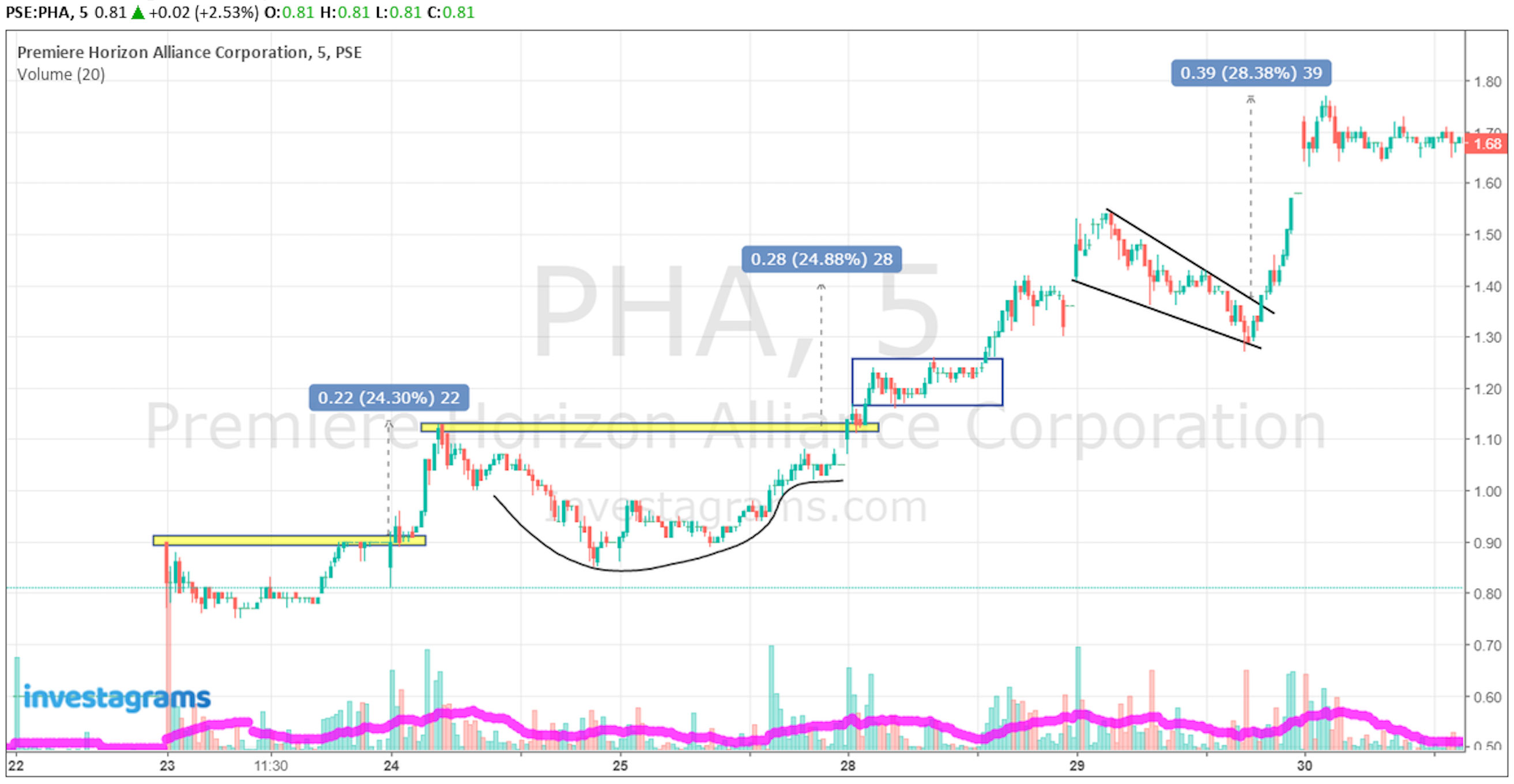 Now if you have the time and experience, you may choose to participate in big intraday movements on lower timeframes. Take $PHA (Premiere Horizon Alliance Corporation), for example. If you used a lower timeframe, you could’ve traded several swings and yield a handsome profit. While if you missed the initial move, you could use lower timeframes to spot buying opportunities. 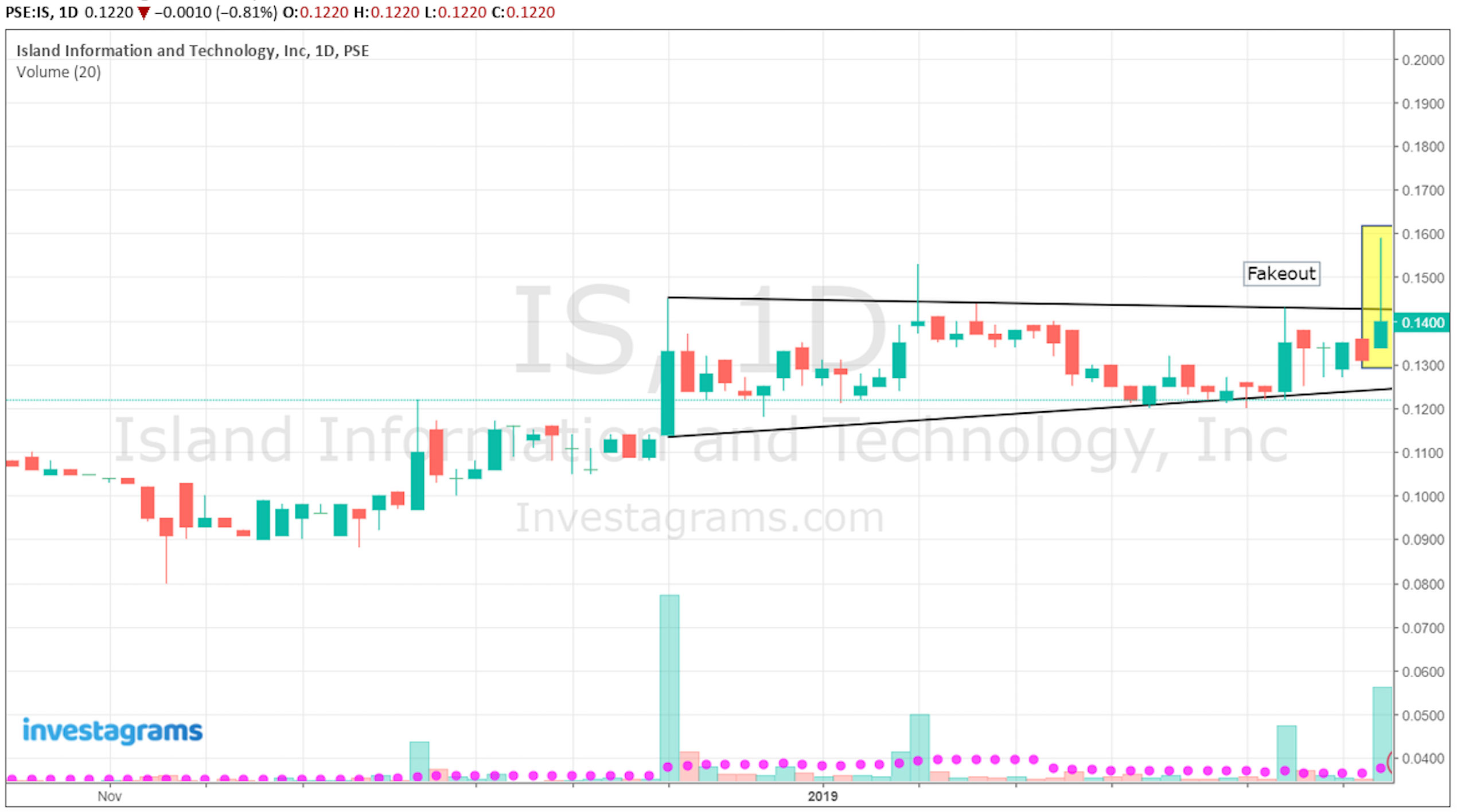 However, intraday trading also has its disadvantages. If you buy a breakout without confirmation, especially in a bear or corrective market, you will be prone to experiencing multiple fake breakouts or “fakeouts.” If you bought $IS (Island Information & Technology, Inc.) when it broke out of its ascending triangle pattern, you would’ve gone through a frustrating fakeout. If you waited for EOD for breakout confirmation, you would’ve avoided this stock. 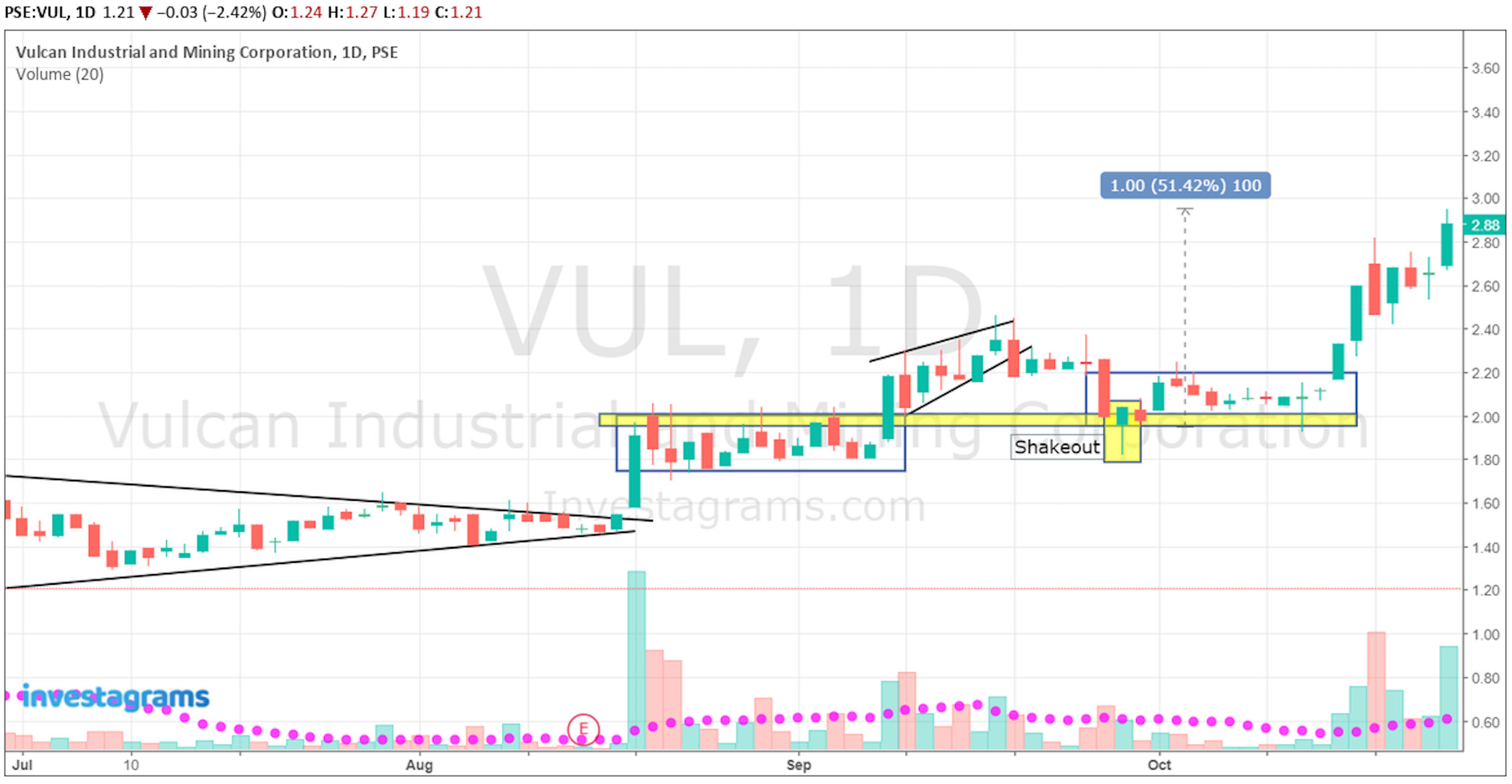 Here’s the exact opposite of a fakeout, a shakeout. $VUL (Vulcan Industrial & Mining Corporation) was one of the leading stocks during the midst of last year’s bear market that yielded a handsome 280% gain in five months. $VUL created multiple continuation patterns to give those who missed out on the initial breakout an opportunity for entry. If you planned to buy $VUL at its 2 pesos support in the highlighted candle and had a stop at 1.85, you would’ve liquidated your position if you executed your stops intraday. If you didn’t have a buyback plan, you would’ve missed a 51%.

1. You are given a confirmation before entering breakouts. 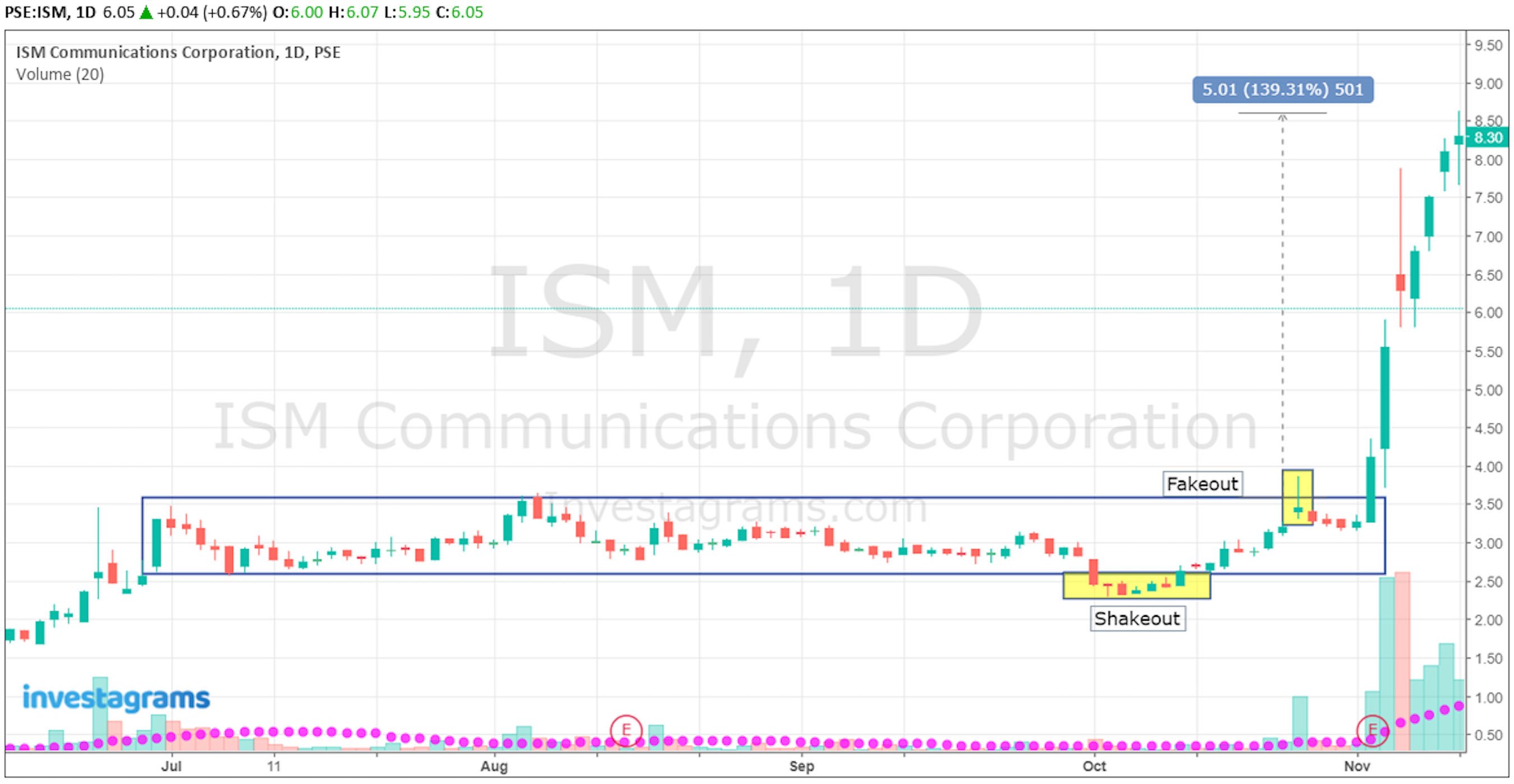 $ISM (ISM Communications Corporation) was also one of last year’s market leaders. The stock underwent a five-month consolidation before successfully breaking out. However, before the successful breakout, $ISM gave a fakeout. Those who bought during the fakeout may not have been able to buy back $ISM when it finally broke out successfully, leading to a missed 139% winner! However, if you waited for confirmation, you would’ve only purchased ISM when it broke out successfully.

2. You avoid prematurely executing your stop. 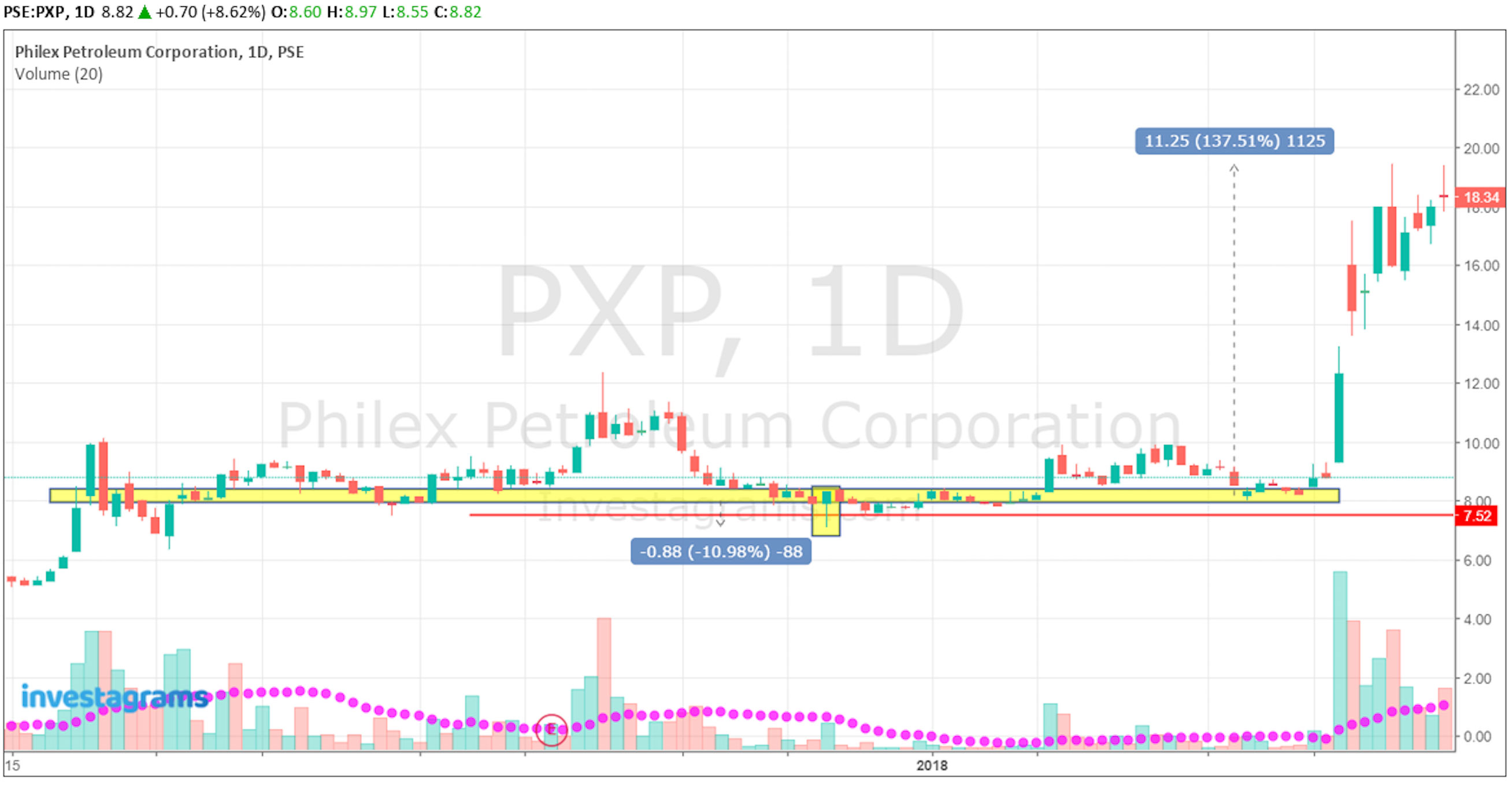 Now we are not suggesting, and we do not encourage waiting for EOD to execute on your stops especially if the price you’re supposed to liquidate is already hit. However, if your circumstance dictates, you cannot check the market until near the closing, then you avoid the risk of prematurely exiting your position that dipped intraday. If you bought $PXP at its 8 pesos support and had a stop at 7.50, you would have stuck with your position since it recovered EOD. Then in a few short weeks, $PXP skyrocketed and made a 137% return in only five days.

3. You don’t have to stare at a screen the whole day.

By doing EOD trading, you’re are given the ability to focus on other things besides the market. If you’re working at a company, you can focus on your tasks and attend meetings without needing to check the markets. If you’re a student, you can pay attention to your classes. BUT that doesn’t mean you can’t execute your trades a little earlier. With alerts from InvestaWatcher, you can discretely execute your trades whether you’re busy at work or school.

1. You miss out on a BIG move that transpires intraday. 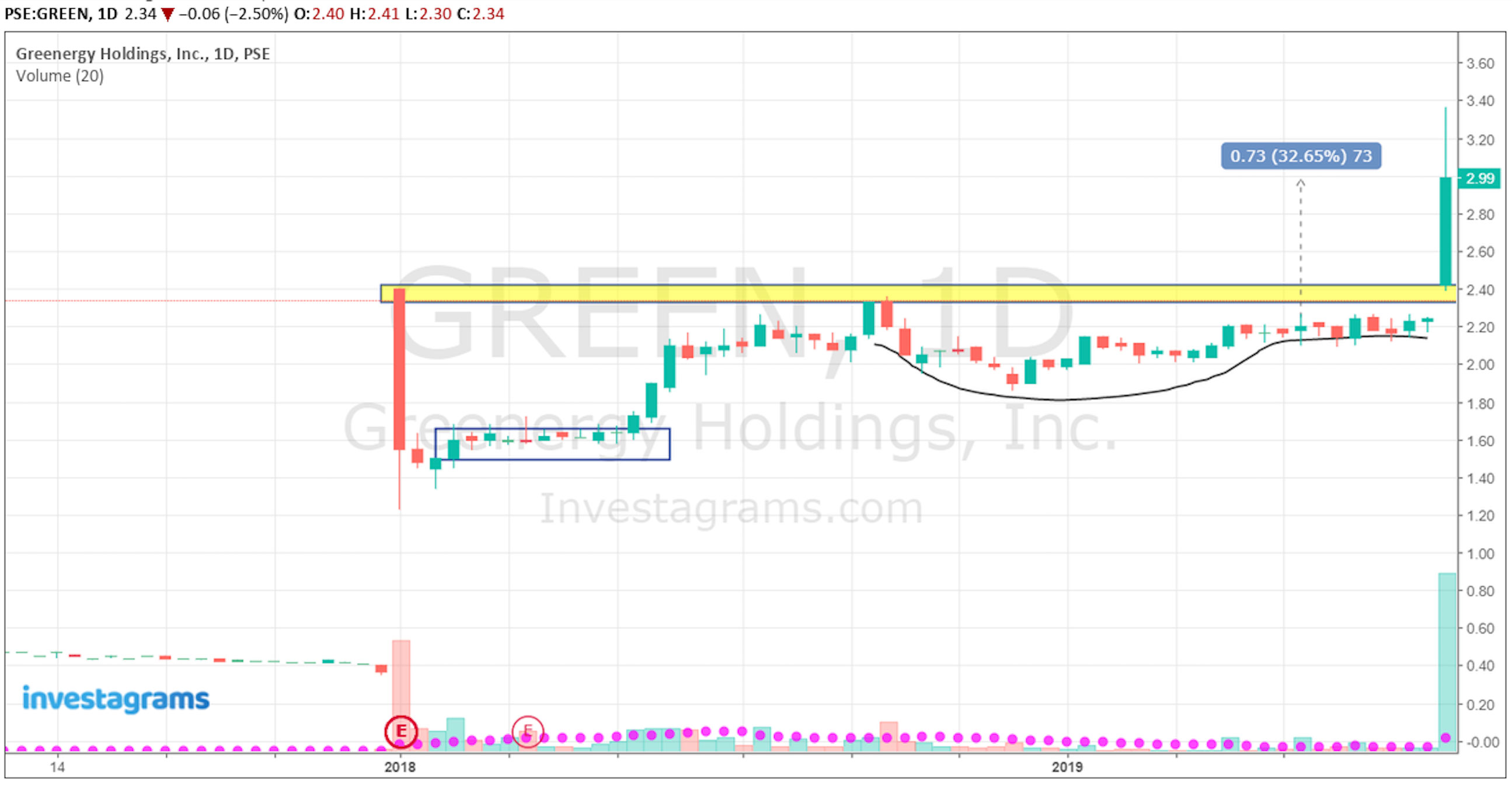 This is one of the biggest disadvantages of trading EOD, missing out on an explosive move since the stock is already too extended from the ideal buy point. $GREEN (Greenergy Holdings Incorporated) was one of the market leaders early this 2019, if you waited for EOD to wait for confirmation of the move, you would’ve missed out on a 32% move in one day.

2. You’re prone to a sudden breakdown in price. 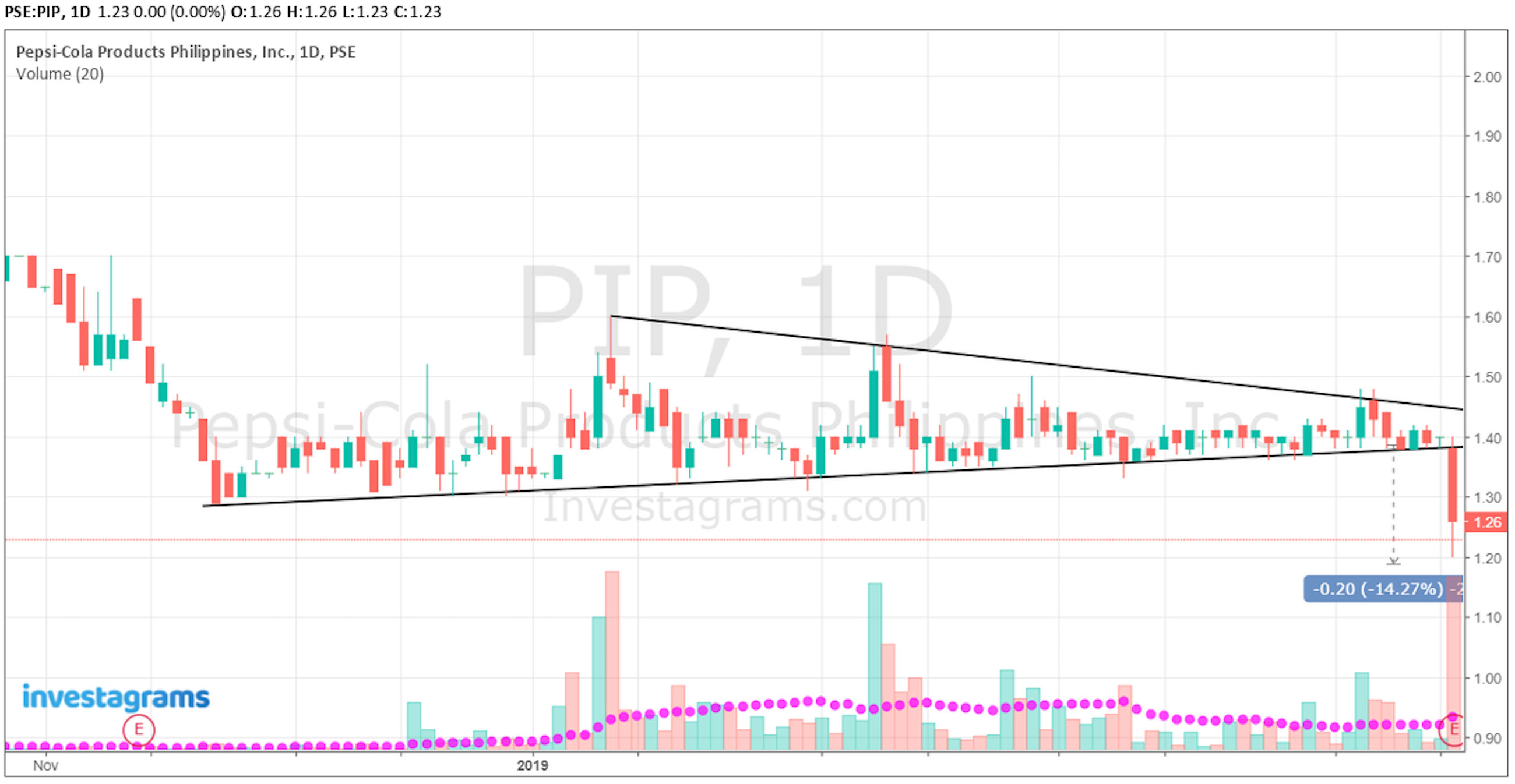 $PIP (Pepsi-Cola Products Philippines, Inc.) broke down out of its five-month consolidation after a bad earnings report which caused heavy selling. If you waited for EOD to sell your position, or if you only check the market after 3 pm, you would’ve had to sell $PIP at a -14% loss. If you accumulated PIP during its consolidation as a position trade and waited for EOD to execute your stop, you would’ve experienced a -14% loss!

Choosing to execute either intraday of end-of-day is and has always been one of the hardest questions to answer, especially when you’re still starting out as a trader. To find out which approach is best, you will need to assess yourself as a person and your own circumstances. Both approaches have its advantages and disadvantages, it is up to you to figure out which one will benefit you as a trader!