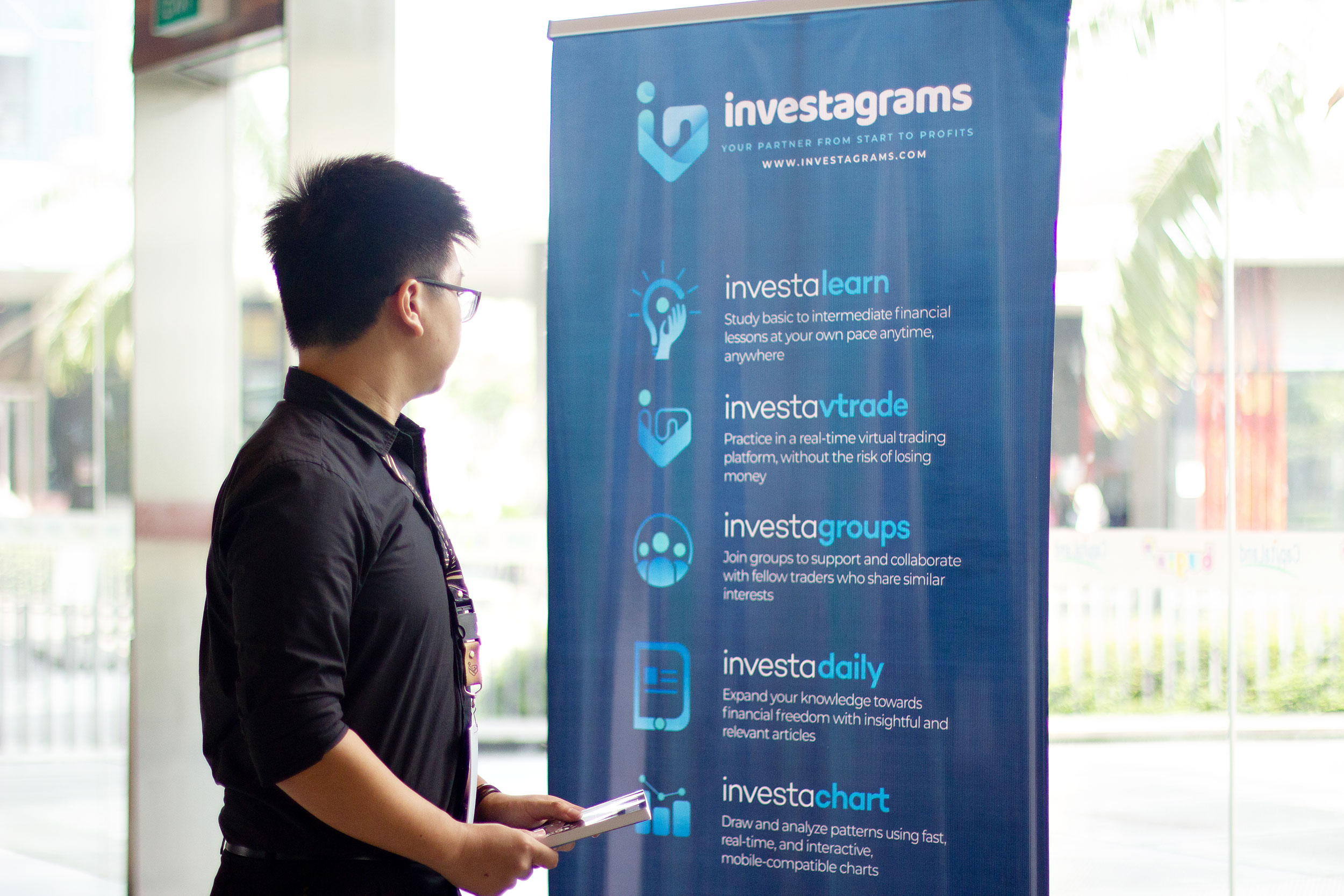 As proven by Scraffycoco who ranked 4th during the Investagrams Trading Cup 2017, it’s possible for students to thrive and come out on top in a very competitive environment filled with competitors from various professions. However, what about those students who didn’t make it to the Top 10? Or even the Top 100? Were the journeys of the youth who weren’t able to make it to the top a failure?

Many might view that not being in the Top 100 in a competition that had thousands of participants is a failure. However, for those perpetual learners, this would only be another hurdle in the process of becoming great. If you view any competition as a place to learn and hone your skills, then you will never come out as a failure no matter what your rank was.

We interviewed Kervin, a long-time user of Investagrams and a student competitor during the Investagrams Trading Cup 2018. Despite still being a student and having only a year of experience in the market at the time, he was not afraid of the pressure of going up against the best traders in the Philippines. Also, he wanted to partake in the competition as an avenue for learning as he aims to continuously improve his trading. “I was never really in a competition with anyone but myself. I saw the Trading Cup not only as a place to learn, but most importantly as a place where I can practice my discipline in executing my setups.”

Q: What was your mindset coming into the Trading Cup?

A: My mindset was to win and keep up with the best traders, but it was also to become a better trader myself. I knew it was going to be a process if ever I would make the Top 100, yet alone the Top 10, and I loved every moment of it.

Q: Did you have difficulty trading during the competition because you were just a student at the time?

A: With my experience, not really, since I trade end-of-day. This means that I usually check the market from 9am to 10am, then again from 2:30pm to 3:30pm. With this approach, I am able to manage my time better between trading and listening in class. Also, I don’t get whipsawed as often since breakouts would have shown signals that it was a fake. On the other hand, there were also several stocks that bounced or broke out intraday that I missed due to my EOD trading. Both approaches have their pros and cons, and it’s up to the trader to decide which approach works best.

Q: What was your most successful setup during the competition?

A: I am a breakout trader, but during the bear market, trading this set up was one of the hardest. What I can say however, is that the bear market improved my criteria in looking for breakout plays. I was able to be more selective with my trades and was more patient in waiting for the right play. It’s very important to focus on the quality of your trades, not just the quantity. Following the 80/20 principle: You make 80% of your profits on 20% of your trades.

Q: What are the tips and advices you would like to give the students who plan to join the Trading Cup 2019?

A: My tip is simple. I encourage all students to join the competition. Because win or lose, at the end of the day, you get to bring valuable lessons when you go trading live. With the current offer more tailored to students, this can be a way for you to jump start and build your investing journey. Also, this year’s Trading Cup is more than just a competition. It’s now also an avenue for learning for those who want to begin their investing journey. If I’m not mistaken, there are bonus webinars and learning modules for student competitors.

Q: How has your experience during the Investagrams Trading Cup 2018 affected your trading today?

A: My discipline has improved tremendously after the competition. When you’re just starting out, this is when you begin to learn different strategies and ways to profit from the market. At first, I was system hopping or trading stocks that weren’t even part of my bread and butter setup. After learning that majority of my losses came from those trades that were forced and didn’t have a proper setup, it reinforced the importance of discipline when it came to execution of the right setup.

Q: How has your experience during the Investagrams Trading Cup 2018 changed your life?

A: First and foremost, it helped me understand that in trading you’re only competing against one person. You don’t compete against other traders, gurus, and especially not the market. Your only competition is yourself, and it’s your responsibility to be a better trader than you were yesterday. It has also showed me how much more I needed to learn and improve on. My goal was to be part of the Top 100, but sadly I didn’t make it. Nevertheless, the competition instilled in me that trading the markets is really a process of perpetual learning.

That’s it for this one! Kervin is a definite example of someone who is a perpetual learner. He came in with a mindset of competing head on with the best traders in the country, but more than that he also wanted to become a better trader himself. He didn’t have any difficulty trading in the competition since he adjusted his trading style based on his circumstances. He chose to be an end-of-day trader and focused on catching setups during the closing hours of the market since he had classes during the day. Also, he highlighted the importance of focusing on the quality rather than the quantity of trades made.

Kervin also encourages students to join the competition as the Trading Cup is also a place to learn and jumpstart one’s investing journey. He also noted that his discipline as improved significantly after experiencing the Trading Cup first-hand, he now focuses on Grade A setups only. Most importantly, he urges everyone to understand that the only competition out there is yourself. On a macro view, your overarching goal should not be to outperform the trader next to you, but to be a better trader than you were yesterday.

Investagrams Featured Trader of the Week: Behind The Trades

Tale of Trades: Traders' Success Stories with D-League and $IDC

Author InvestagramsPosted on August 16, 2019August 16, 2019
This week’s featured trader is not someone who was able to successfully spot a specific stock before making a significant advance,...
Read More

Optimizing Risk and Reward in the Stock Market

Author InvestagramsPosted on March 8, 2019March 9, 2019
In the stock market, there are only two certain outcomes: The possibility of making a profit and the opposite. However, almost...
Read More

10 Timeless Tips to Improve Your Finances

Author InvestagramsPosted on October 18, 2018
Truth is, financial literacy is considered as taboo and many people are struggling between demonstrating a firm grasp of financial principles...
Read More

Author InvestagramsPosted on April 26, 2019April 27, 2019
Stock trading is a game of probabilities. You can’t judge a trading strategy just because of a single, profitable trade or...
Read More