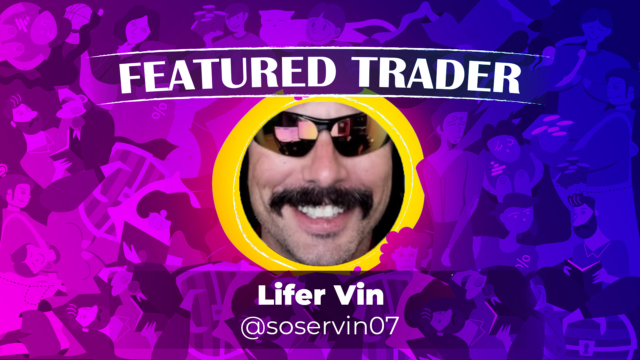 All the way from Canada, let’s give a round of applause and congratulate our featured trader of the week @soservin07!

One of the key techniques in trading is learning to create a state of mind that is not affected by the market’s behavior as said by Mark Douglas. As an experienced trader in the market, @soservin07 reminds us to trade smartly and to do our own research before clicking the buy/sell button.

Just recently has @soservin07 given his in-depth thoughts about the market which has allowed us to obtain valuable information when trading.

About two weeks ago, our featured trader showed us his thoughts on $BTC, the top crypto coin in the market. With so much FUD going on on the market, many are still unsure on where this coin will go in the next couple of days.

During this specific trading period, @soservin07 has plotted multiple technical indicators which would help him predict price actions for his trading plan. As we can see, he has included bollinger bands, parabolic SAR, multiple EMA’s, RSI and Stochastic RSI. He hopes that we would see signs for the next bullish cycle if it breaks 25k, but if it doesn’t, a 15k down to 14k would likely be the worst case scenario. As of today, $BTC is ranging around the 19k-20k levels.

In terms of technicality, $BTC has hit a 52-Week Low of 17,614 indicating a strong support level around that area and a 52-Week High of 68,906.48. As we can see in his chart, he has plotted a “Tight Descending Wedge” indicating that a bullish cycle would be possible in the days to come. We may also notice in his chart that the price of $BTC is below most MA indicators he has plotted, indicating that prices are below average compared to the days before. RSI during that day was around 40-50 levels meaning it was neither overbought or oversold during that specific time period. However, as we look at its stochastic RSI, we may notice signs of reversal as a cross is seen to take in play. Volume levels are also seen to be slowly increasing compared to the previous weeks.

Just recently, the CPI report has been released with inflation slowed to 8.3% in August. This has plunged almost, if not, every market in the world with BTC dropping almost 10% after the inflation report. With the global economy still on the verge of collapsing due to high interest rates and prices, trading BTC at the moment would not be the best option for most traders as FUD would cause them to pull their investments out. As of today, BTC has a total market cap of around 387 billion.

In the daily time frame, BTC is forming a descending triangle, which is often a bearish pattern. It is currently trading above $20k while maintaining the $19.8k support level. From here, we can anticipate a short-term bounce up to the $21.5k–$22k level, after which another rejection is possible.

Any daily closing below the $18k level will confirm the breakup of this descending triangle, which is a critical support level for BTC. After the breakdown, we may see levels between $12k and $13k.

Take note as well of the recent EMA Cross (10,20) which signals a bearish reversal for BTC. Prices are also seen to be below average in the last 20 days with its RSI around 40-50 indicating that it is neither oversold or overbought.

With all the FUD on the market and the current global economic status, dollar cost averaging would most likely be your best option. Buying the dips with small percentages of your total capital would be a great strategy to slowly build up your portfolio, while at the same time, taking advantage of the economic status of the world.

When trading, always buy the fear and sell when everybody else is happy. As what @soservin07 said, always do your own research and trade smartly. Once again, KUDOS to @soservin07 for being this week’s featured trader! Enjoy your 14-day InvestaPrime Access and continue to be an inspiration to the trading community.