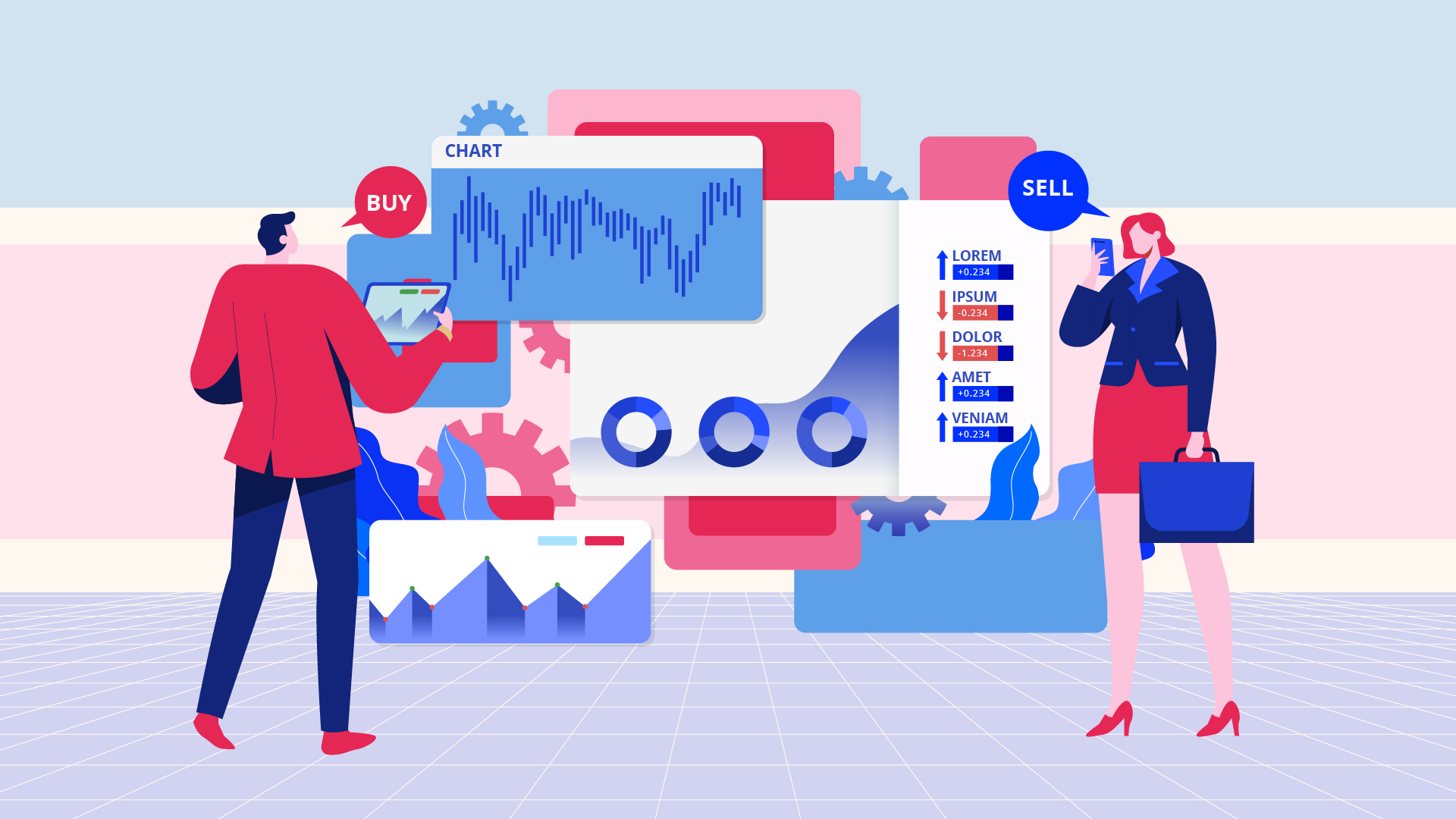 When you start out in the markets, especially if you began during a sideways or bear market, the first type of selling you get accustomed to is selling at a small loss or cutting your losses.

However, once the market environment finally becomes friendlier to a long-only market like the Philippines, you start to see some gains in your portfolio. Not just a few 5% to 10% winners, but you start to see your positions go up 20% to 30%.

You get hyped! Your hard work of studying the markets day in and day out and continuous cutting of losses finally paid off. You believe all your stocks are going to the moon and you’re about to experience your first bagger. All until the stocks you hold hit their resistance levels, make a climax top, or close below a key moving average and start to reverse. You give up the majority of your profits, or even end up at a loss.

What happened? You may be wondering. You had all these spectacular gains in a short period of time, but you lost it almost as fast as you made it. What happened was you didn’t know how to sell at a PROFIT. You got used to cutting your losses small and once the tide finally turned in the market you made some money, but only on paper. Selling at a profit is a totally different ball game from selling at a loss.

Our goal in this article is to show you three different ways on how you can take profits on your winning trades. Here they are:

A target profit, or commonly referred to as TP levels, is a place in the chart where you sell your position at a profit. Your TP will usually be placed in areas of resistance; whether it’s an intraday high or a multi-year resistance level. Instead of further discussing what a TP is, let’s show you some examples. 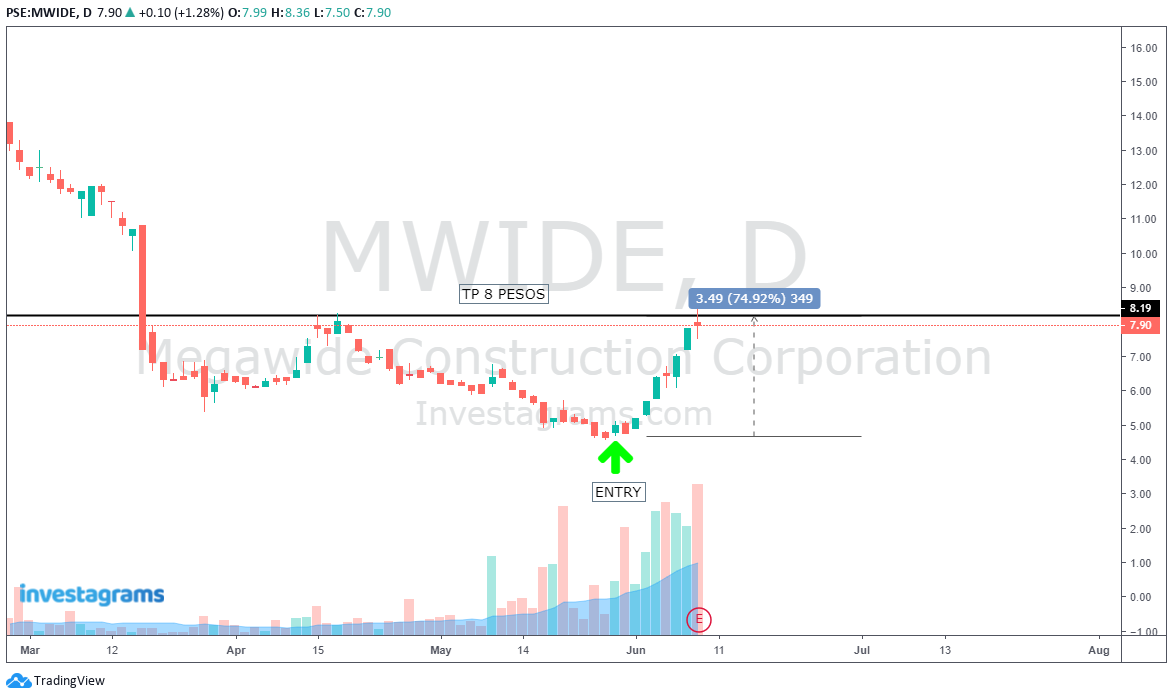 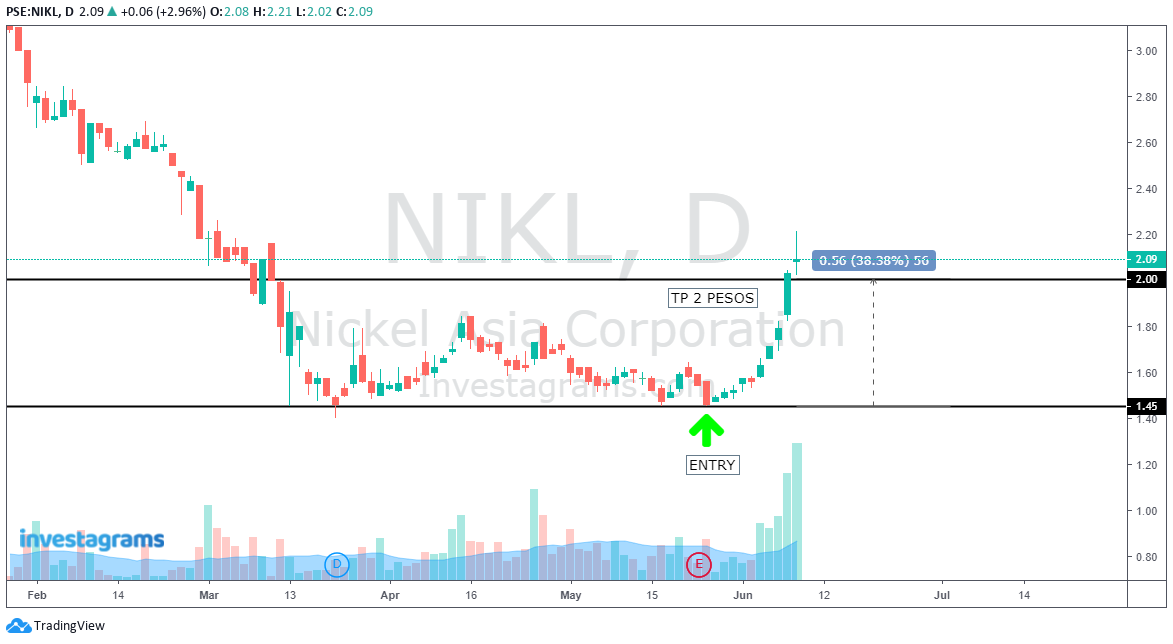 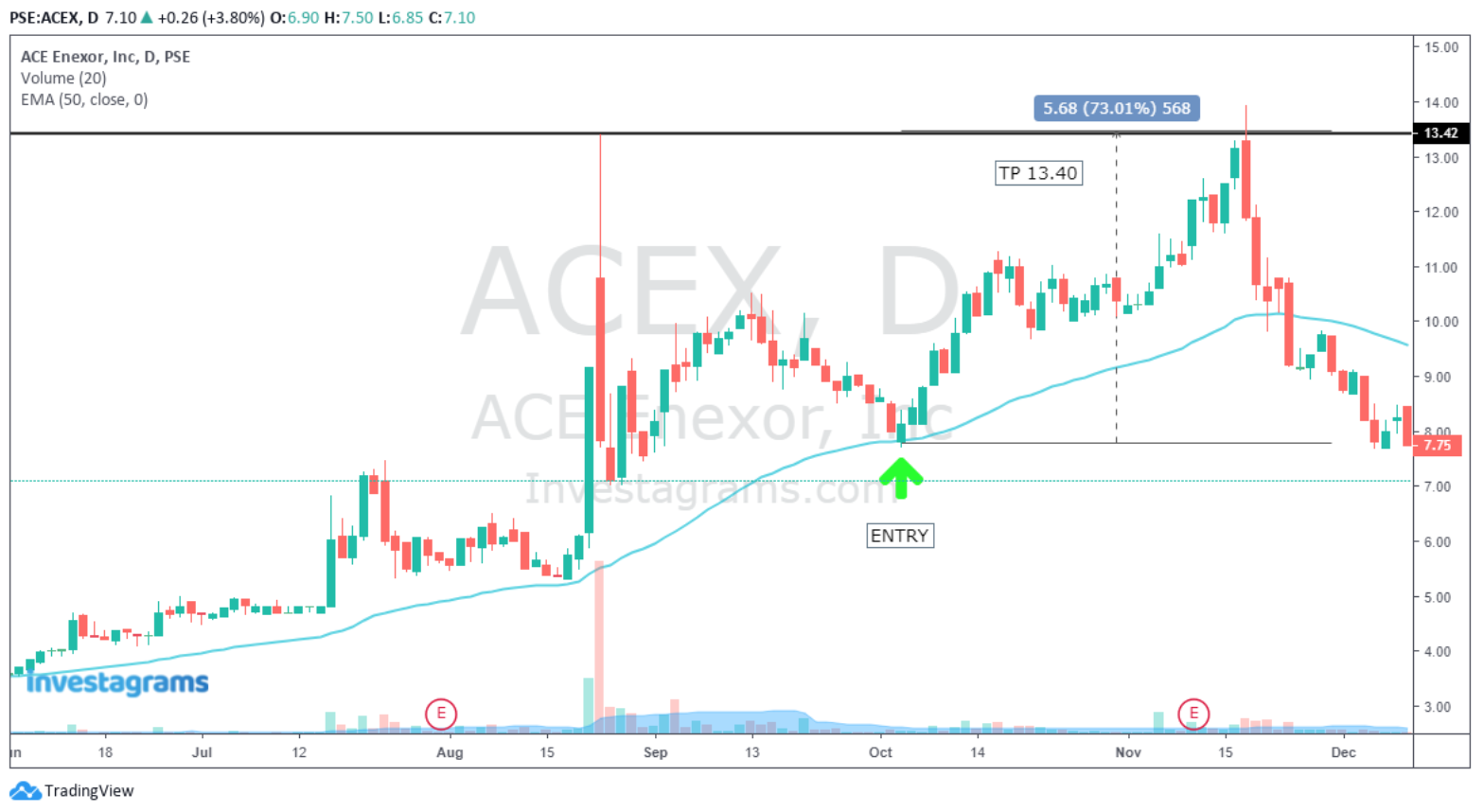 Another style you can incorporate into your selling strategy is the concept of selling into strength. Famous growth stock investors and market wizards Mark Minervini and David Ryan usually sell into strength when they’re taking profits. Selling into strength means you’re selling your position (or a portion of your position) while the getting is good. You sell on the way up as prices continue to rise.

What’s the logic behind this? The reason you want to sell into strength is that you want to lock in gains before the stock starts to reverse. Selling into strength also ensures that your equity curve continues to go up in an uptrending fashion. This style is especially important for those handling big funds since you will need to sell your position not when you want, but when the market gives you an opportunity to do so. What better time to find a ton of buyers other than when the price is going up?

When you sell into strength, however, note that you’re most likely going to sell too early. BUT THAT’S OKAY! The goal is not to sell at the top, but it’s to sell at a price higher than your cost on a consistent basis. There are now hard and fast rules when selling into strength, but generally, you can begin lightening up on your positions when a stock is up huge in one day or makes a climax top (up 15%, 20%, or more) when everyone believes it’s going to the moon (climax top) or when the trade has made 2x your average gain. 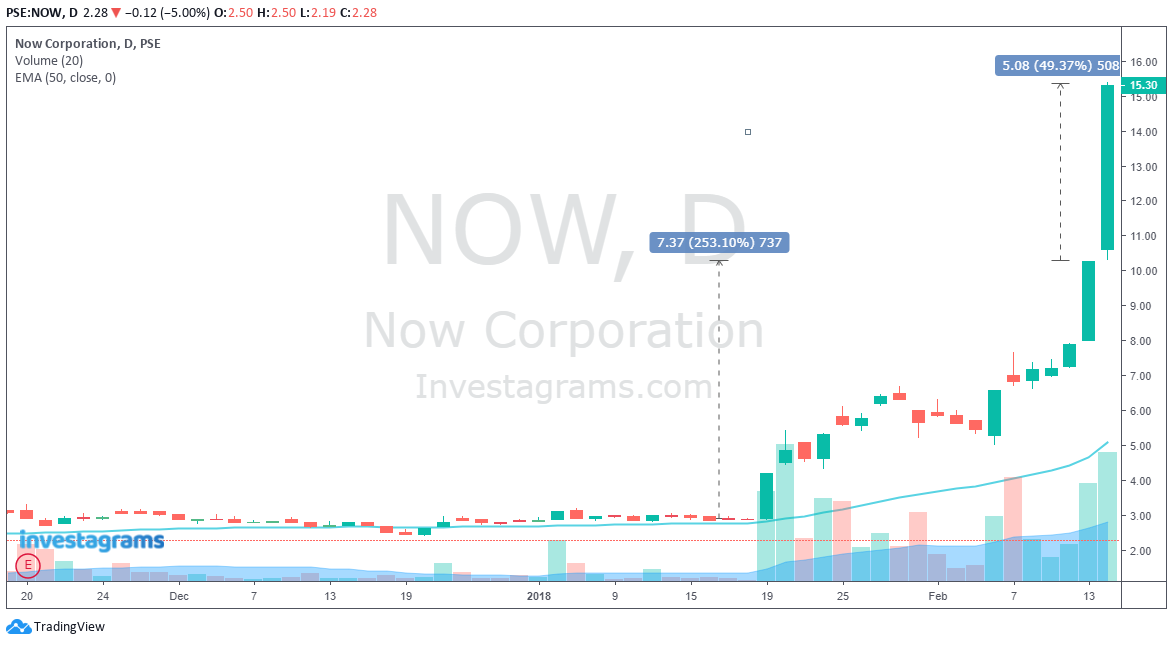 If you were able to get this below 10, the best area to sell into strength was at 15 pesos. The stock was in the process of putting in a climax top by going up 50% in one day after already going up 250% in a few weeks. People were also getting extremely euphoric, a dangerous sign. We all know what happened the next day. 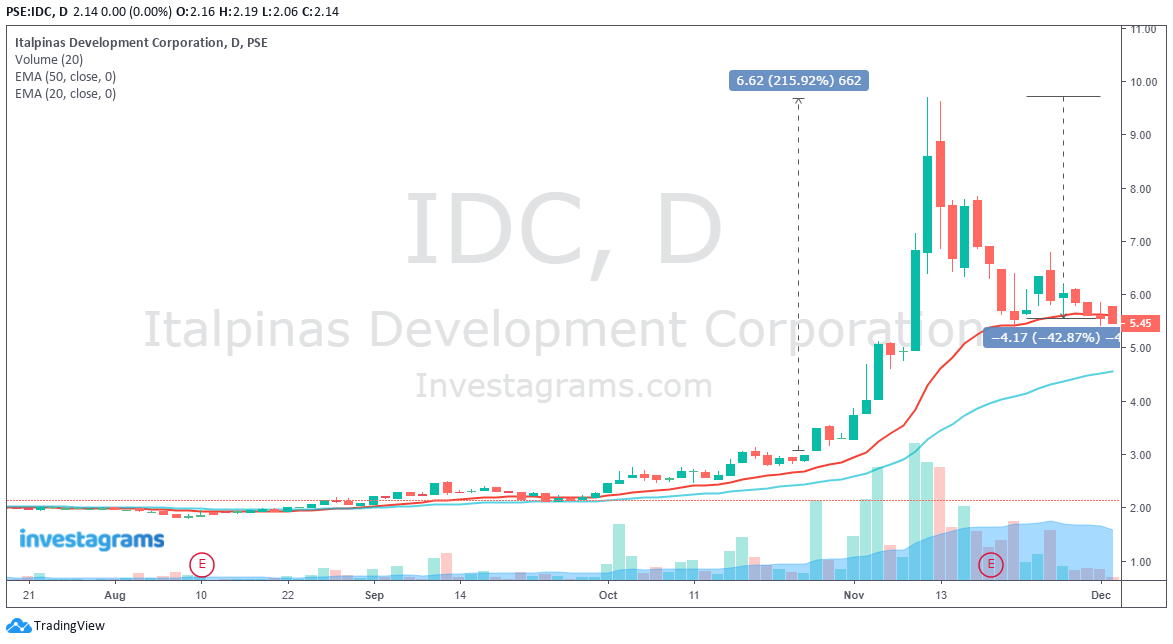 Here’s another reason why selling into strength is a viable option, especially in stocks that get extended. If you planned to trail your profits on $IDC using EMA20, you would’ve given up 40% profits on the trade. Who wants to give up that much room? That’s why it’s important to sell portions of your position on the way up to lock in some gains especially when the stock gets extended, everyone gets euphoric, or the trade is 2x or 3x your average gain.

HOWEVER, by focusing on selling into weakness during BULL MARKETS you may latch on to a market leader for a big move, possibly even a triple-digit return type of move. When you use trails stops, you’re basically going to be stuck with the trade until the trend reverses and the price closes below your chosen trail stop, if prices continue to go higher with minor pullbacks, then you may be in for a long profitable ride. 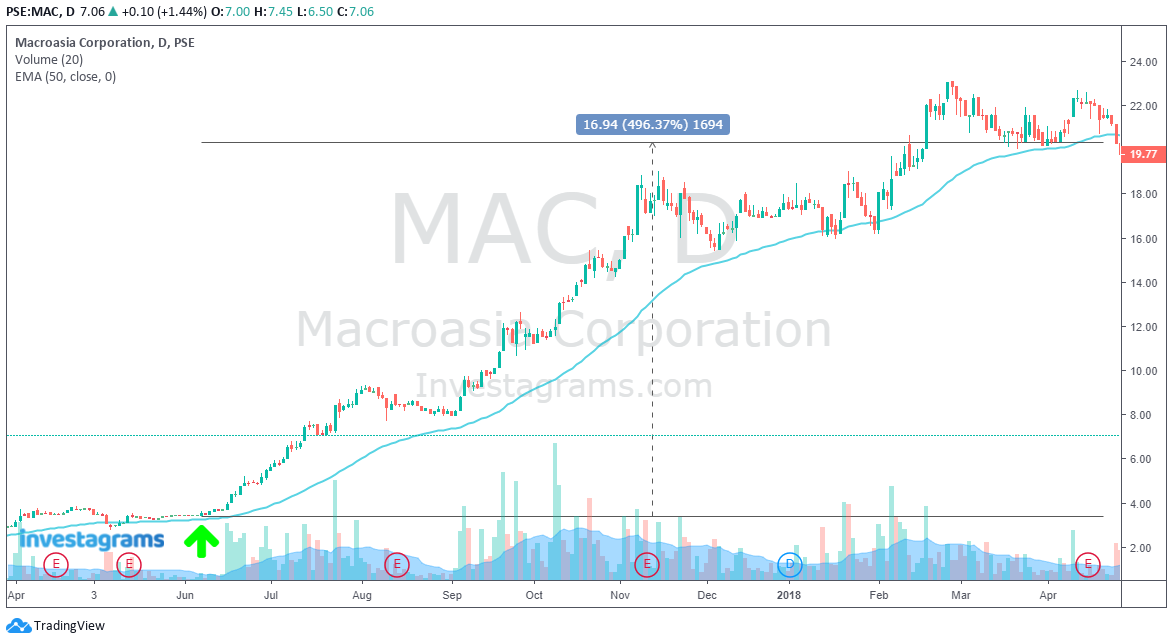 This is probably the best example to showcase the potential gain if you sell into weakness in a strong stock in a bull market. If you bought $MAC during the breakout at around June 2017 and trailed your position simply using EMA50, you would’ve been stopped out at around 19.70 pesos, a near 500% gain. This is the power of trend following. 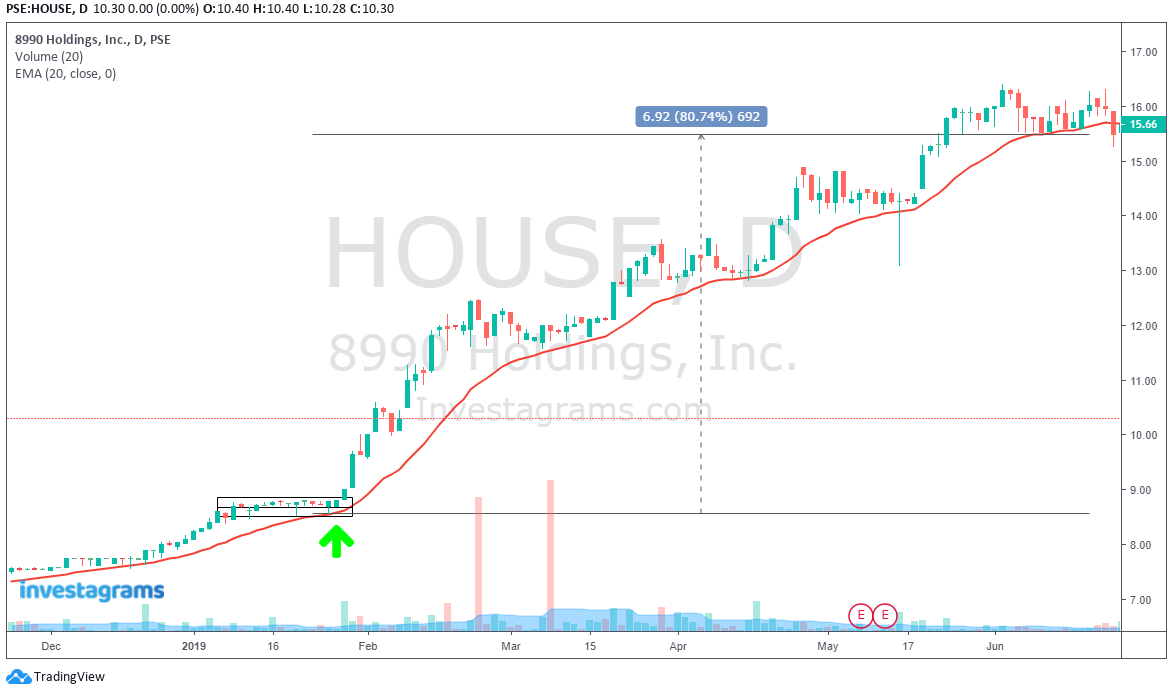 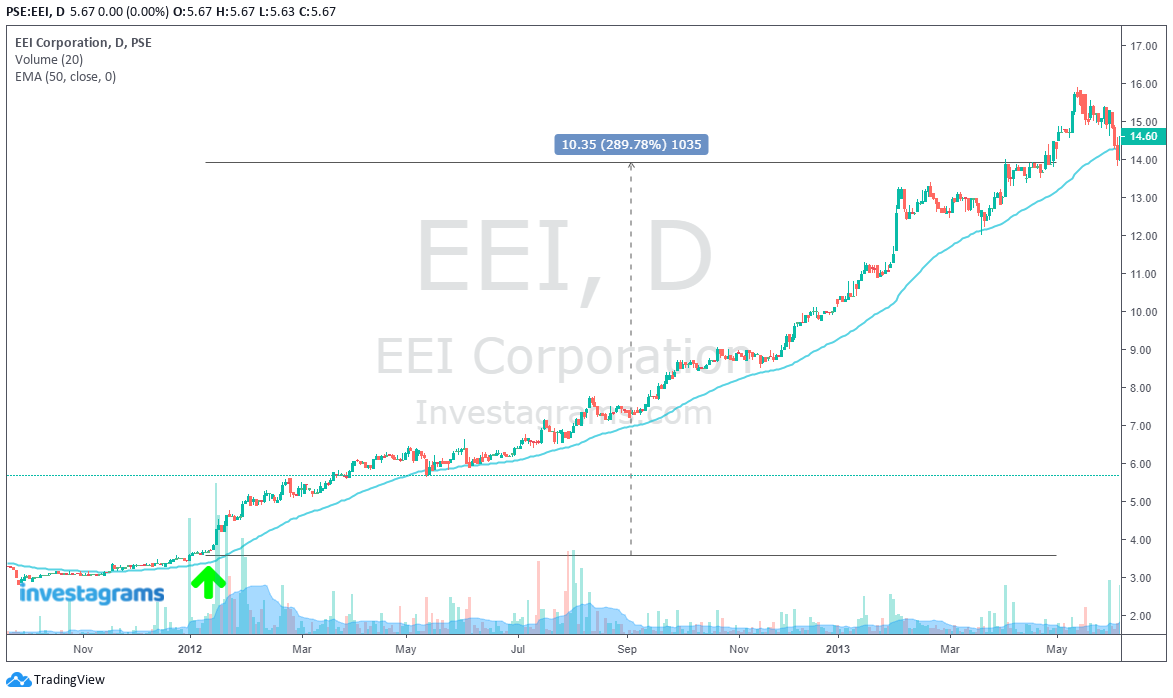 There are no hard and fast rules for selling at a profit, what matters most is choosing the right approach that best suits your personality. No one style mentioned above is better than the other, there is only what works best for you. The most important thing to remember is that you must EXECUTE on your chosen approach. You’re also not just limited to choosing one of the three discussed, you can use all three depending on the situation.

You can also do a COMBINATION of the three approaches. You can sell 50% of your position into strength to lock in some gains, then trail the remaining half using EMA50 to take advantage of a potential big move. It’s up to you on what combination you want to use.

Most importantly, when selling at a profit DON’T KICK YOURSELF FOR NOT SELLING THE TOP! Here’s a quote by Baron Rothschild, a great trade from the 1900, “I never buy at the bottom and I always sell too soon.”

Cryptocurrency: The Money of Our Future?

Aftermath: The Art of Forwardtesting

Author InvestagramsPosted on December 22, 2018December 22, 2018
Web platform improvements is here! Our aim is to build a better communication, stronger engagement and improve the user experience of...
Read More

Author InvestagramsPosted on May 11, 2019May 11, 2019
When trading on technicals, some traders consider chart patterns as of one the most effective trading tools in their set up...
Read More

How to Succeed in Trading

Author InvestagramsPosted on November 15, 2018April 17, 2019
Stock trading is never easy, but it is simple. By far the biggest hurdle faced by traders is we tend to...
Read More