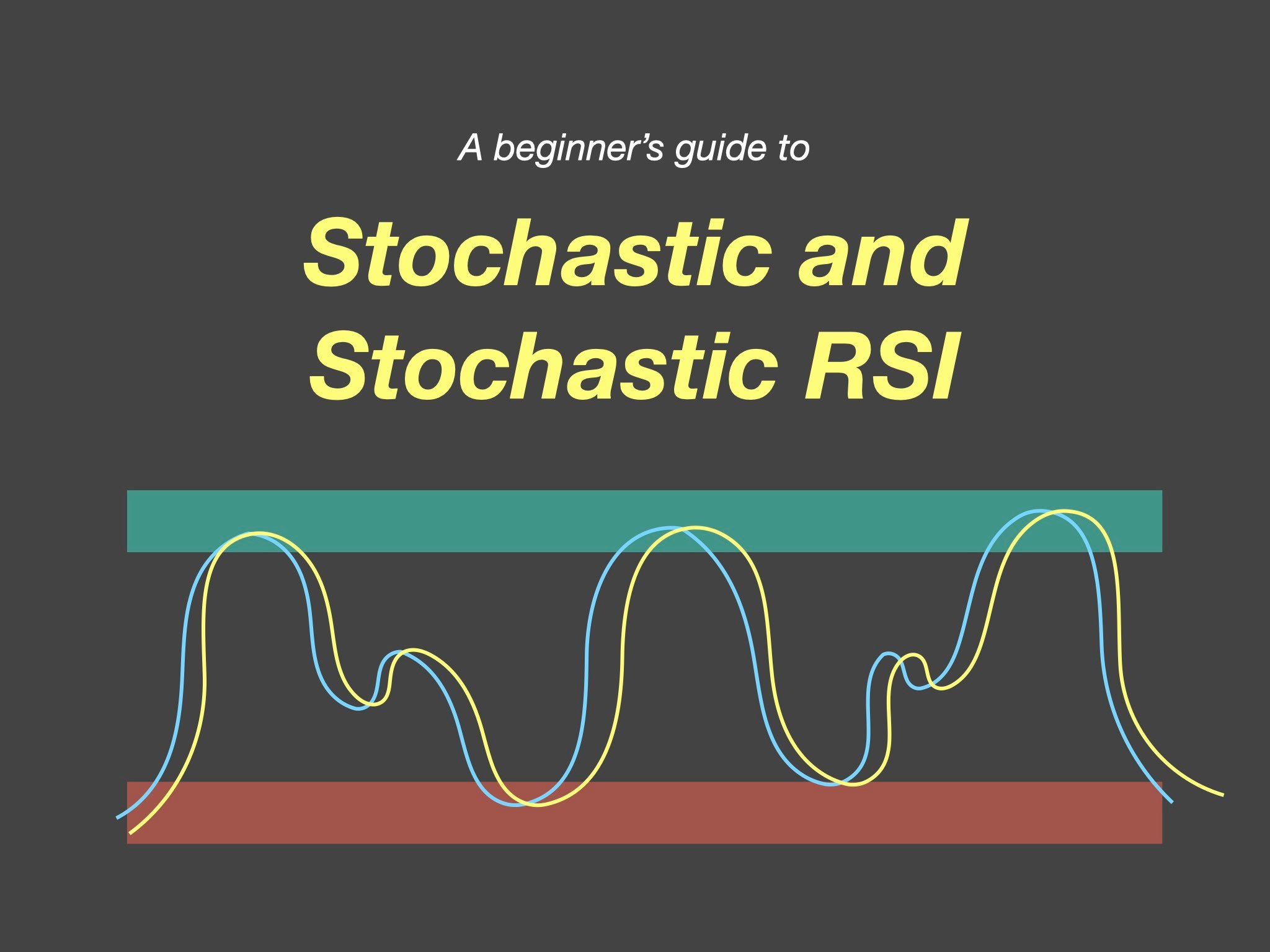 Stochastic and Stochastic RSI are some of the most commonly used indicators of all time. Used by various traders, these indicators are oscillators that oscillate between 0 and 100 to change from periods of oversold to periods of overbought levels. They help determine the strength of the move and can give different entries and exits depending upon the scenario.

Stochastic and Stochastic RSI (let’s call them Stochastics collectively for simplicity’s sake) have two lines: the Stochastic line, commonly called as %K which measures the strength of the current move relative to the range of the previous n-periods, and a second line called %D which is a simple moving average of the %K. 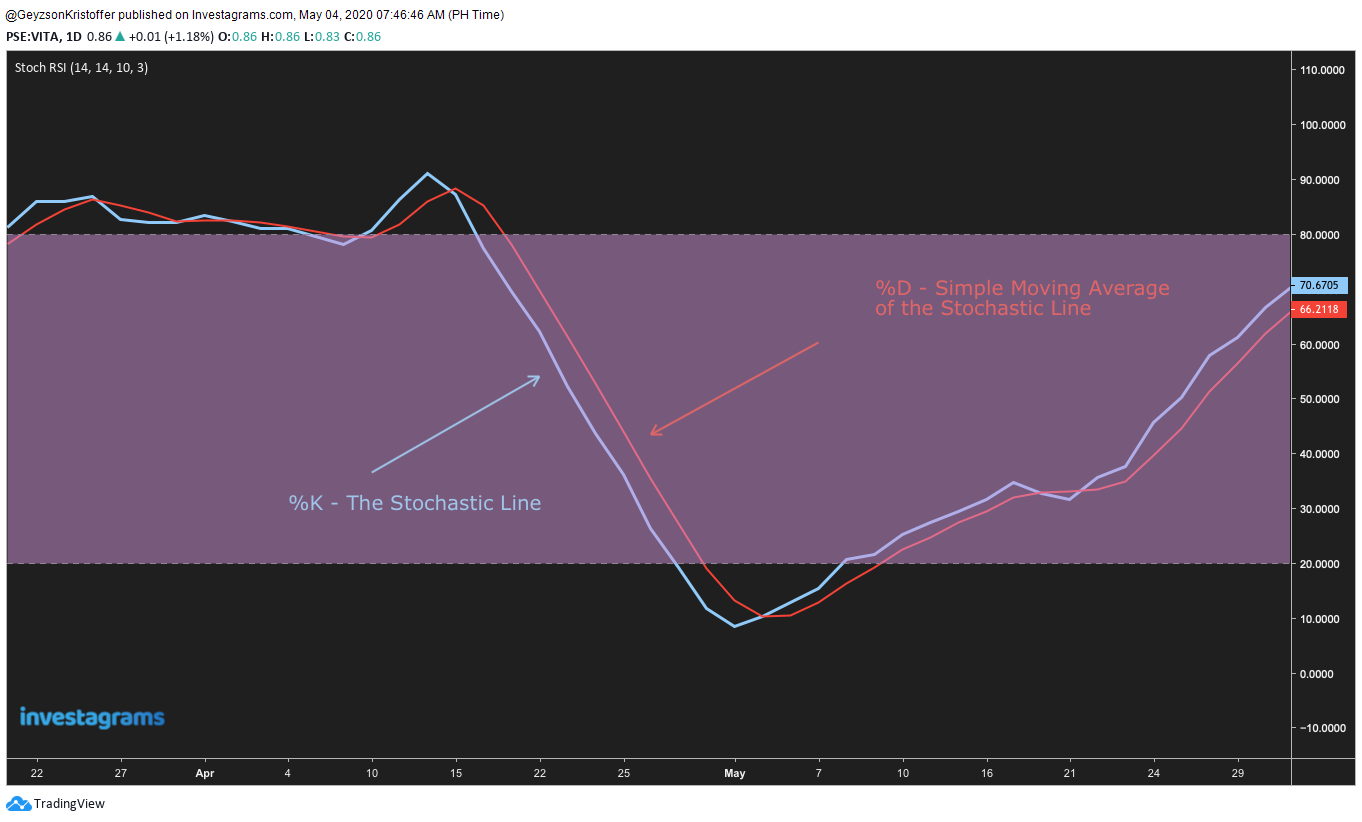 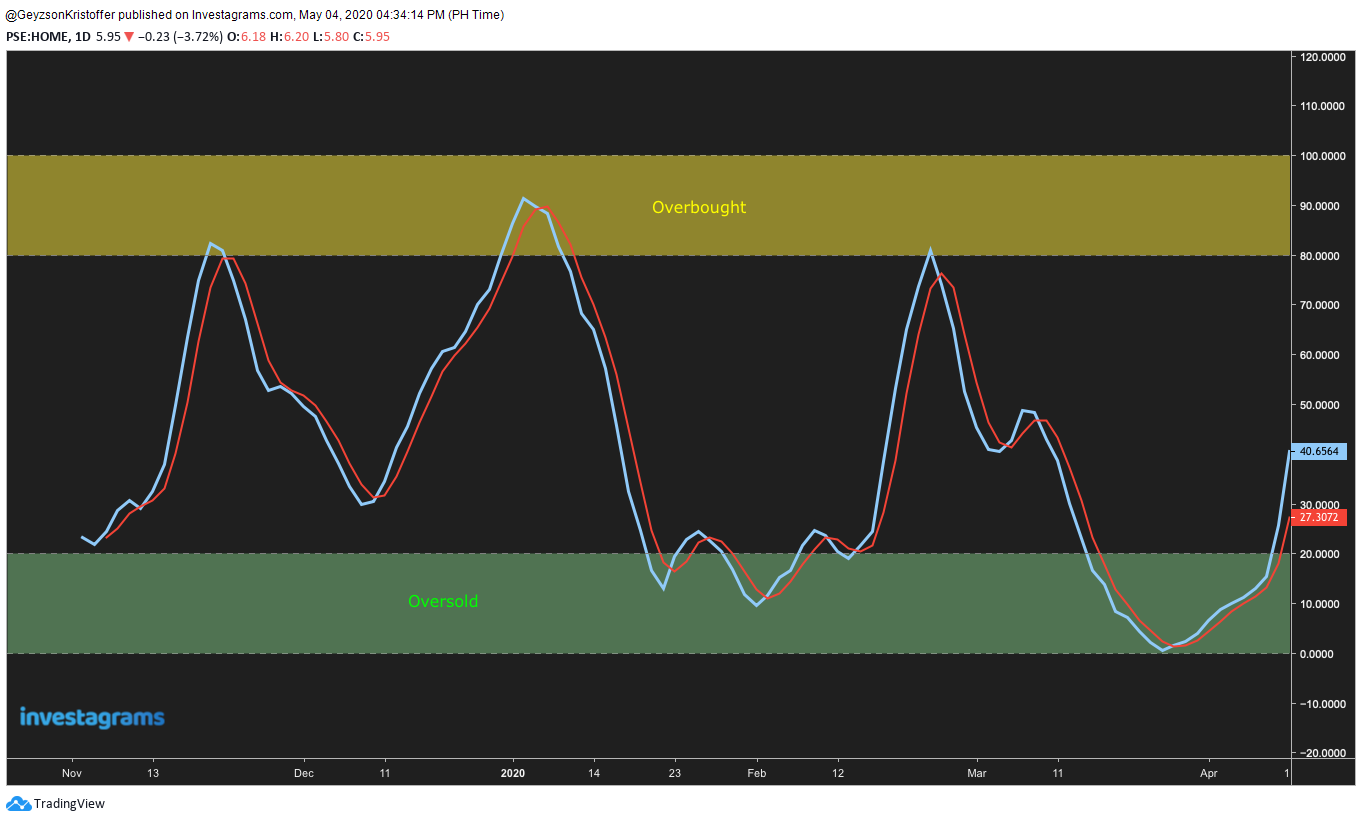 The standard configuration of a Stochastic Oscillator is a 1-period Stochastics line computed for the last 14-candles with a 3-day simple moving average on top of it. If you want a detailed computation of the values, click here.

Popular uses of the indicator: 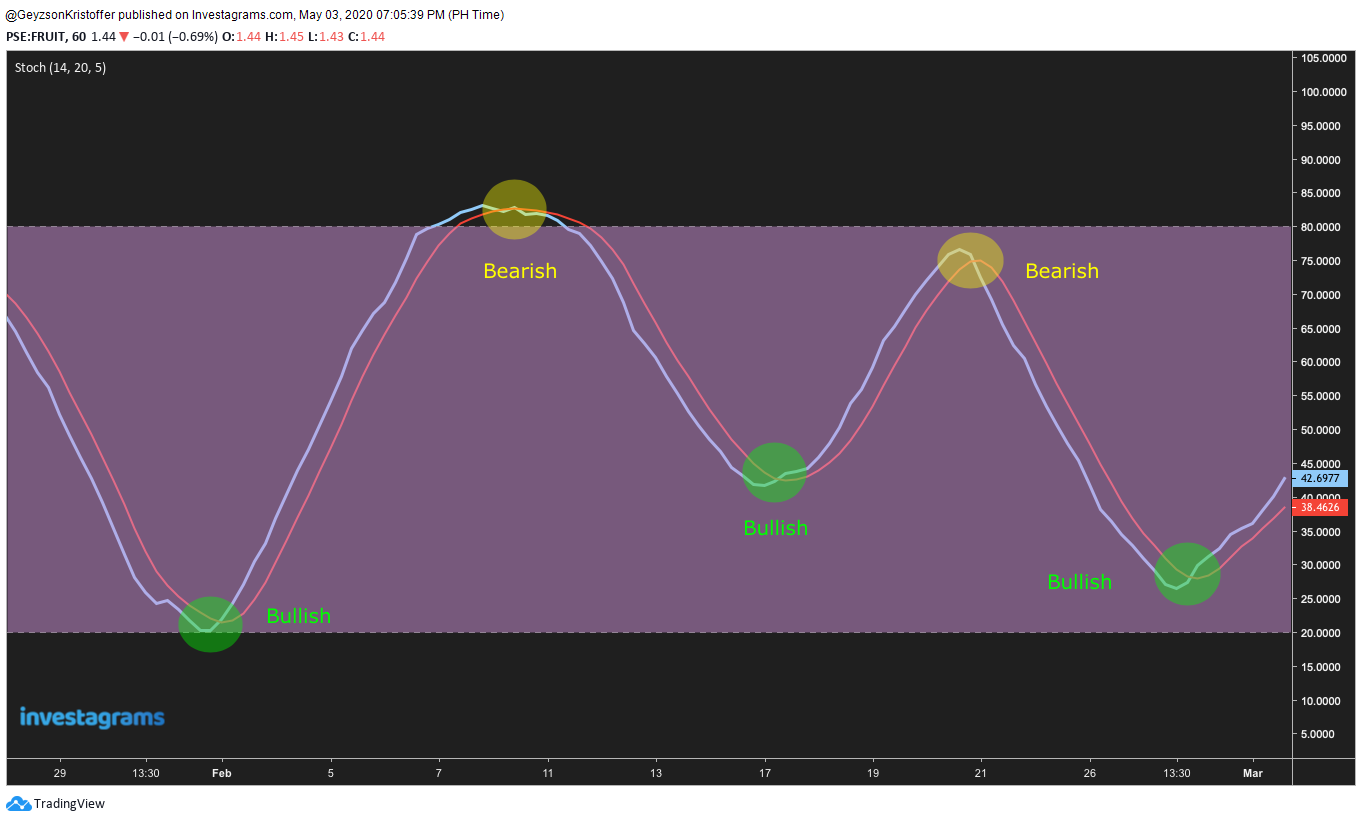 I personally don’t trade using this strategy as this gives way too much signals. In trading, you want your signals just to be on that sweet spot where it gives many signals, but not too much that you get in and out of trades too quickly. Balance is key. 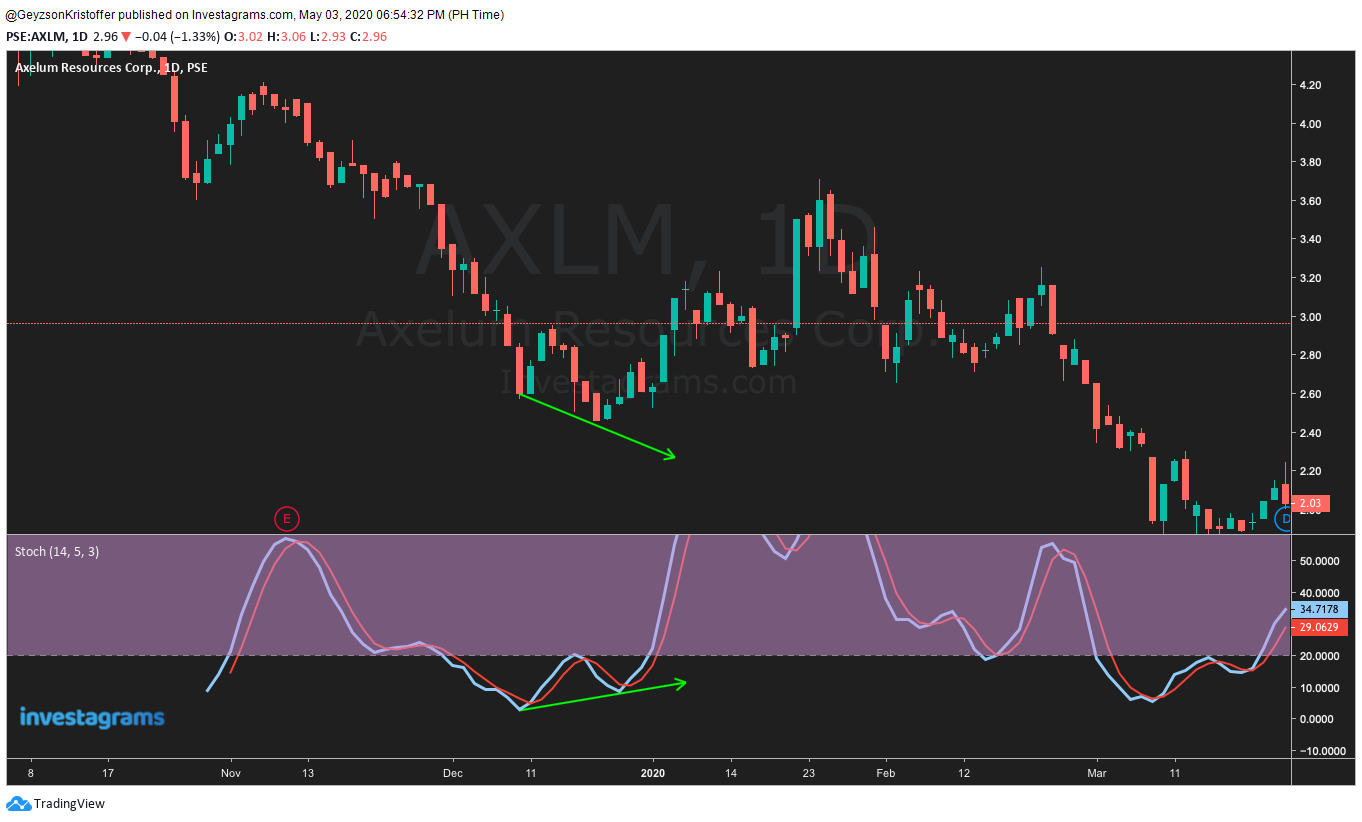 On the other hand, a bearish divergence occurs if the price makes a higher-high while the oscillator makes a lower-high. 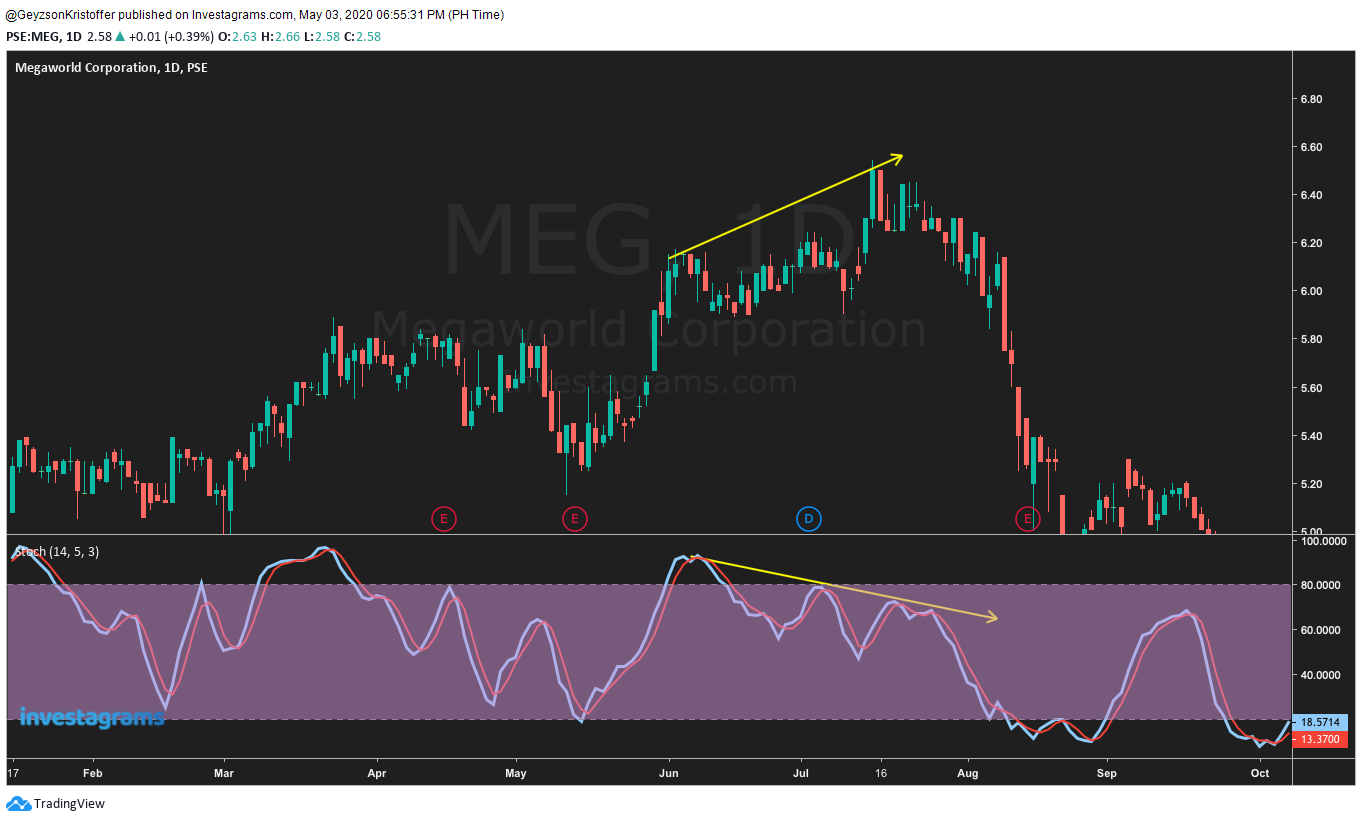 $MEG made a bearish divergence last June 2019 after the prices made their higher-high and the Stochastic made a lower-high. 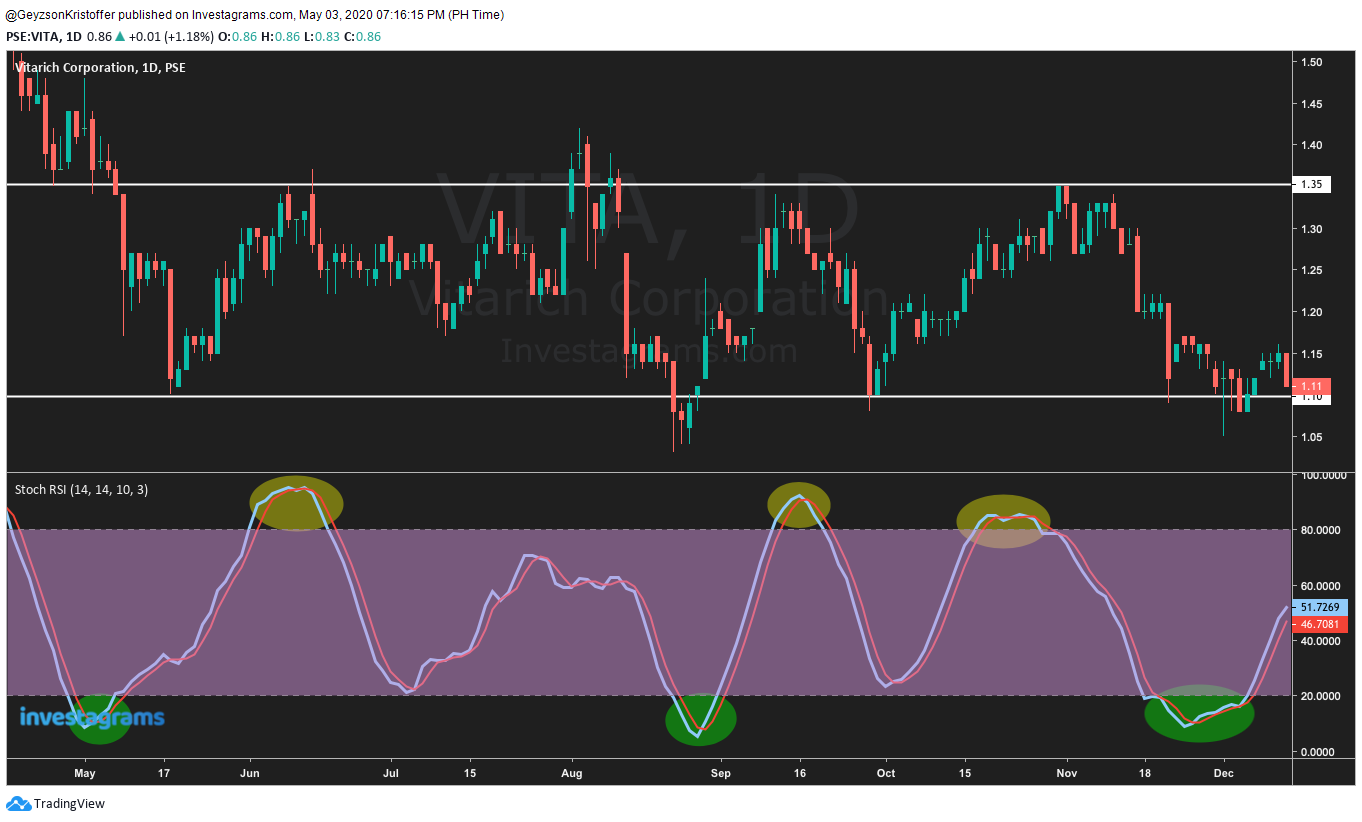 $VITA with a range-bound price action seems to reverse after hitting oversold and overbought levels.

But be cautious as this strategy appears to be only effective in a ranging price action. Since the markets are on a trend most of the time, using this strategy might become fatal overtime.

Below is an illustration about overbought stocks still going up by a significant amount and oversold stocks still diving down deeper. 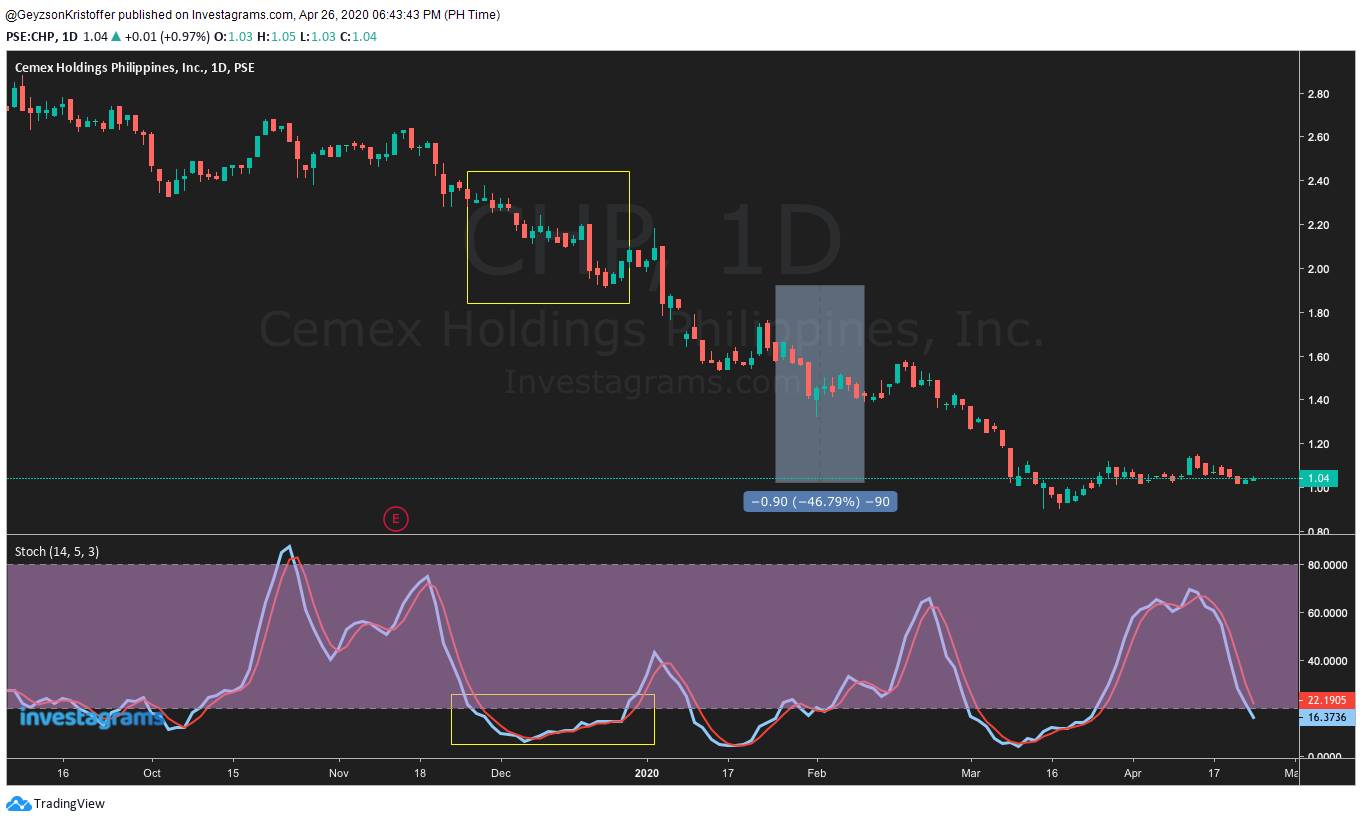 Oversold? After hitting oversold levels, $CHP continued to show weakness with more than a -40% move. 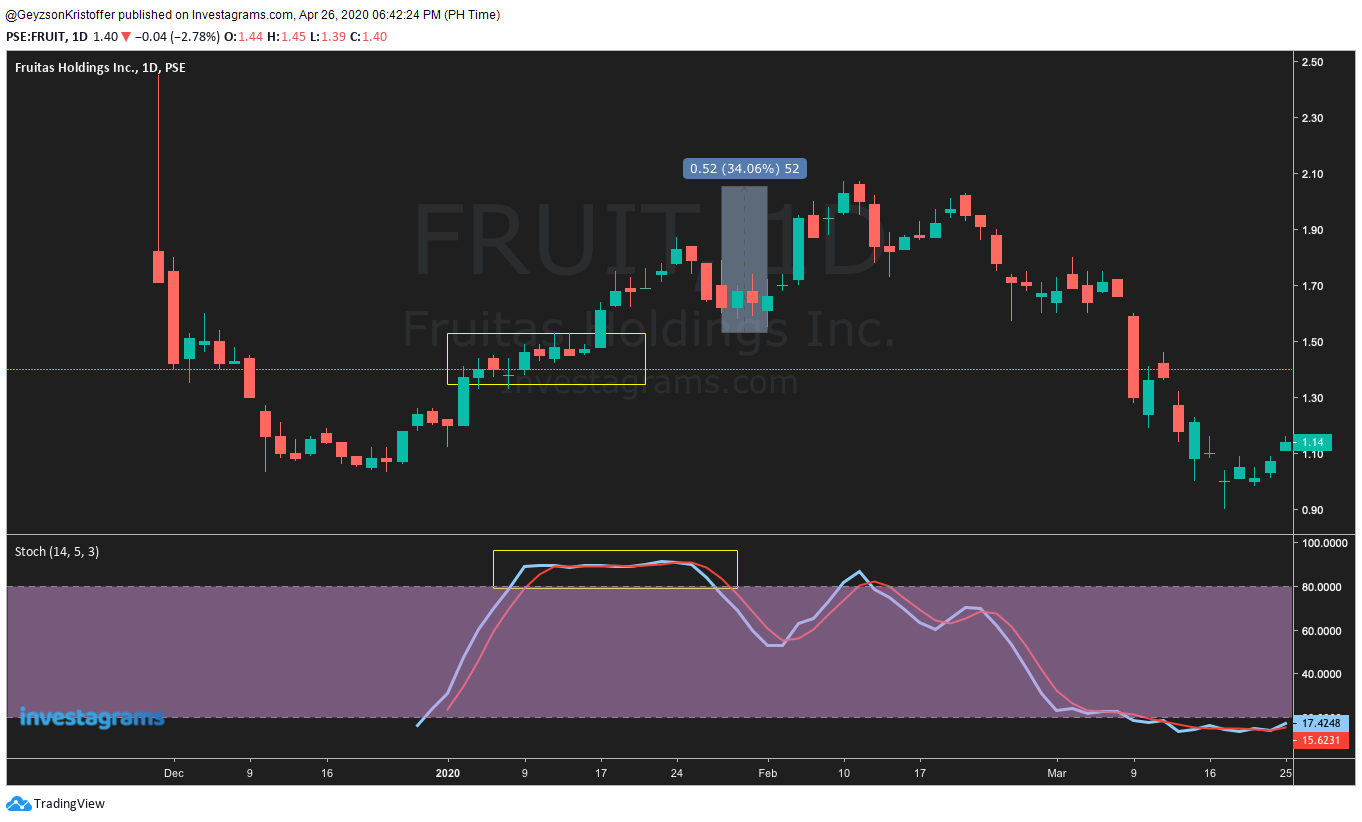 Overbought? $FRUIT went on and made new highs after hitting overbought levels. Showing that there are no overbought stocks for aggressive buyers.

A better way to use Stochastics

Stochastics are computed based on the strength of the current price to the previous n-candles (or current RSI to previous n-RSI values), which means that Stochastic and Stochastic RSI are strength indicators. Using this information, we can infer the following:

What does this mean? It means that you can consider buying only if the stock’s %K and %D are above 50.

Here are some of the examples: 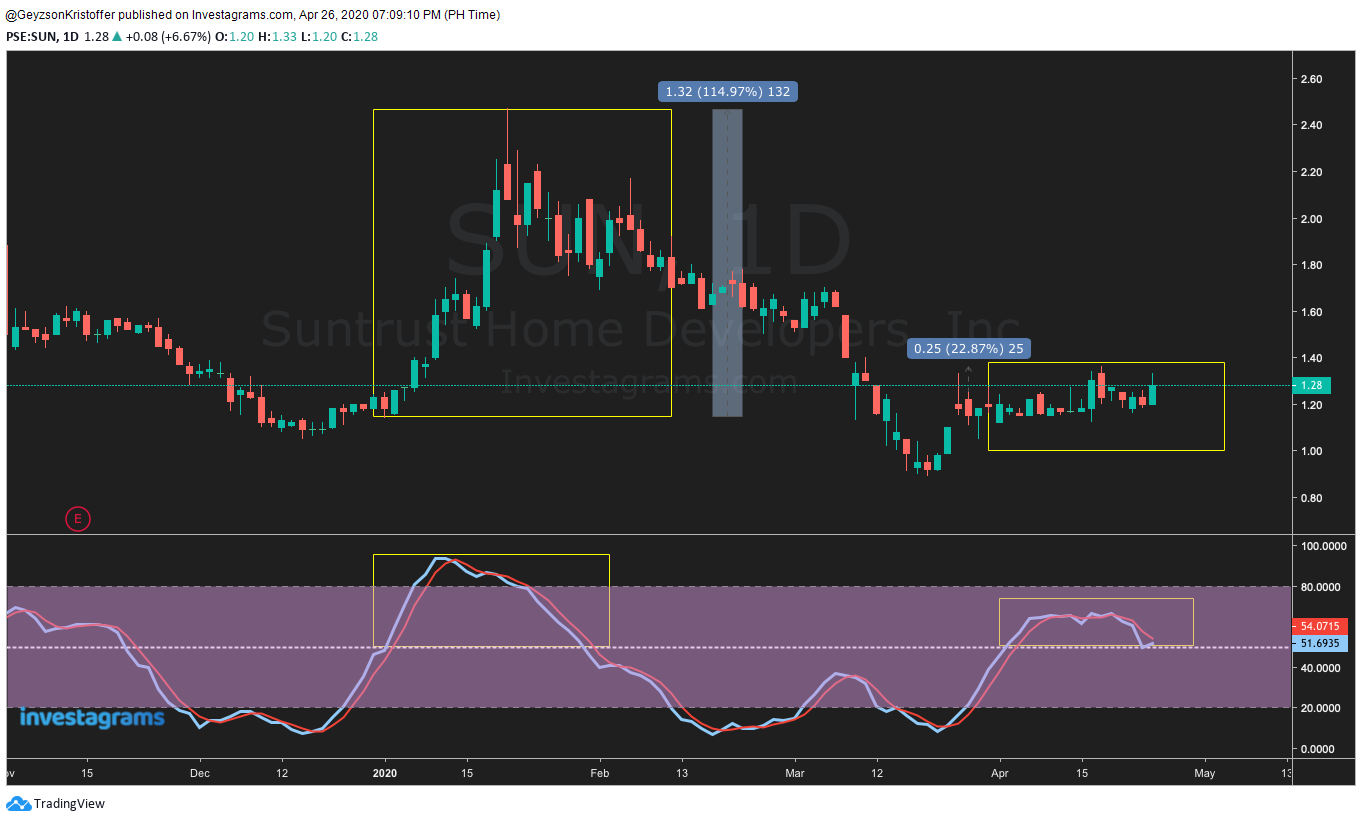 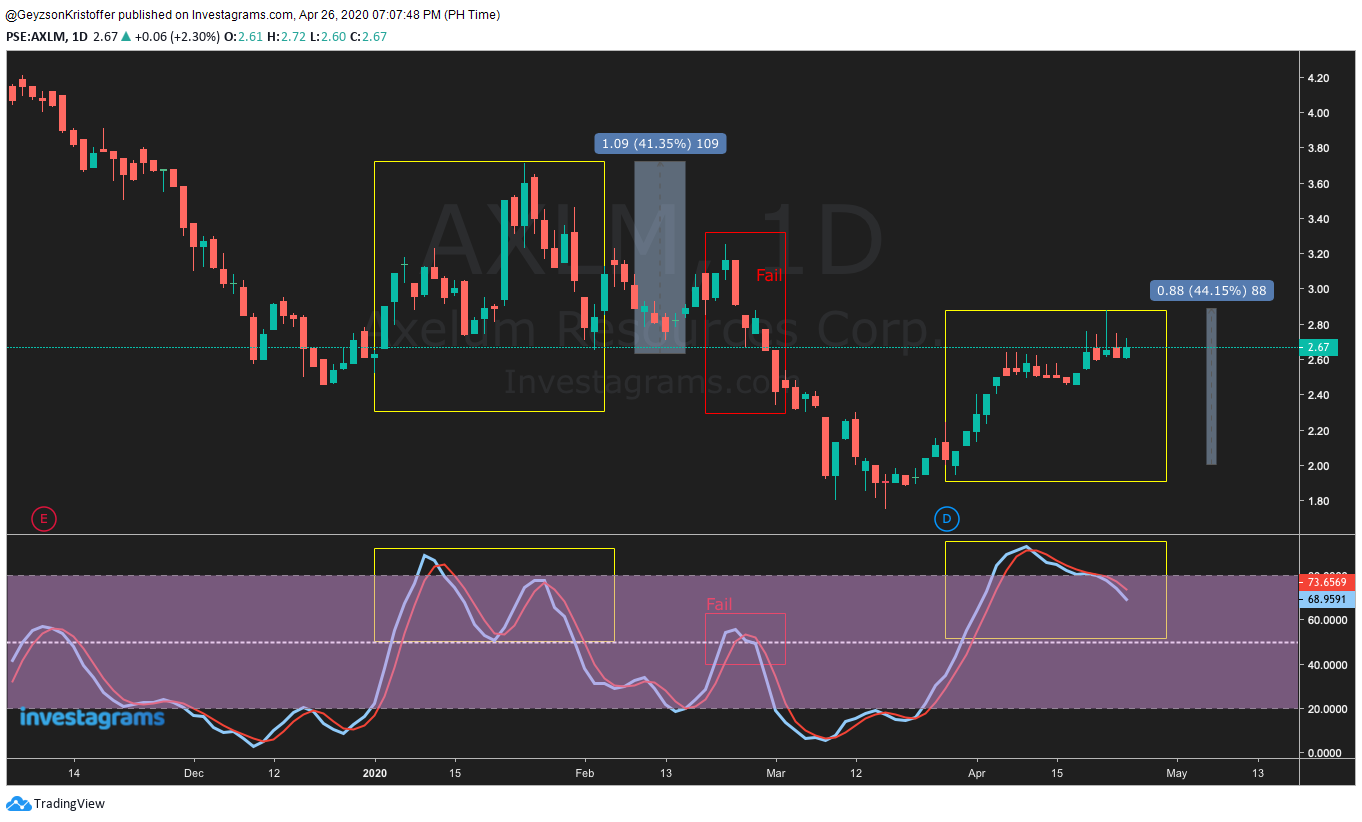 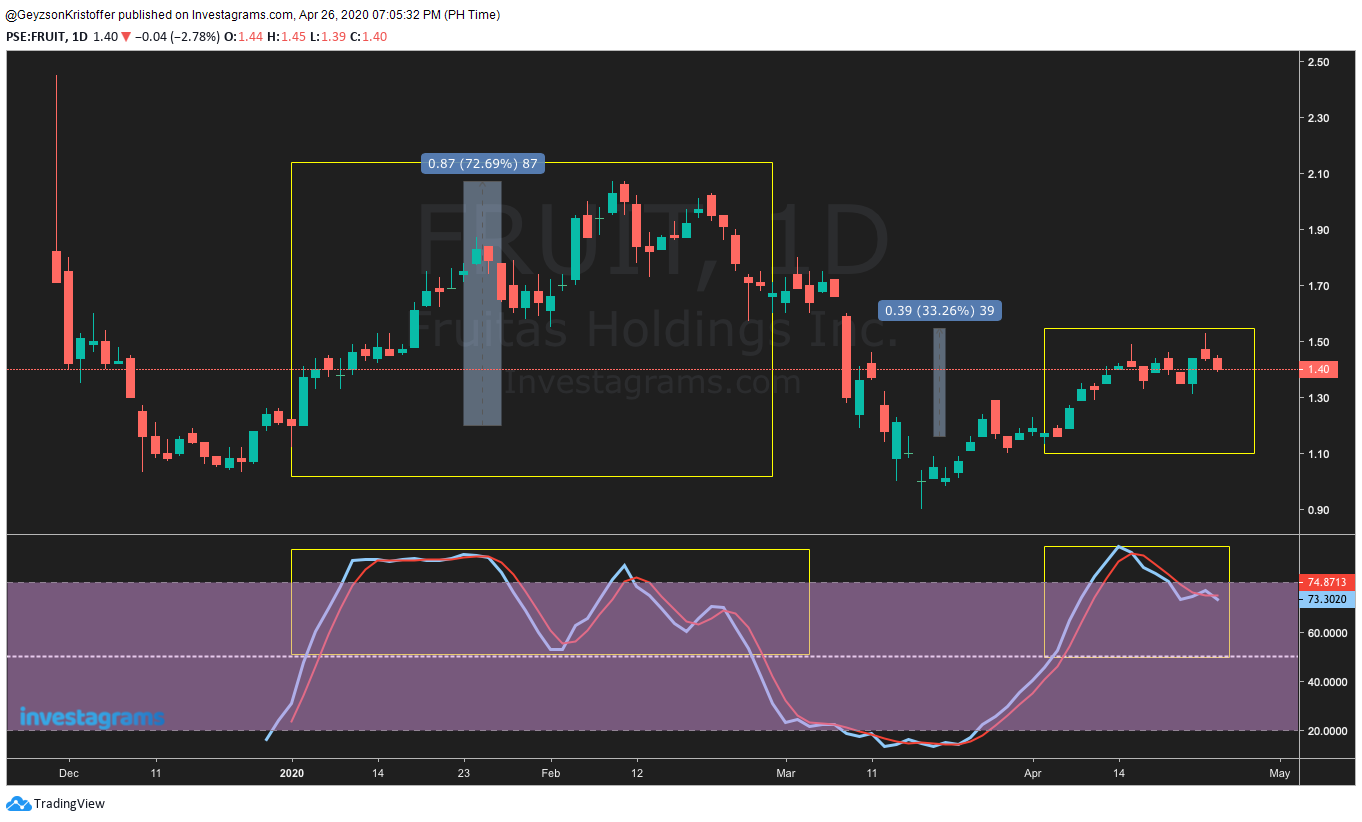 4. $EURO – 87% and 75%. Periods of extreme strength show high volatility and it’s up to the trader’s discretion whether to reduce or hold onto his positions. 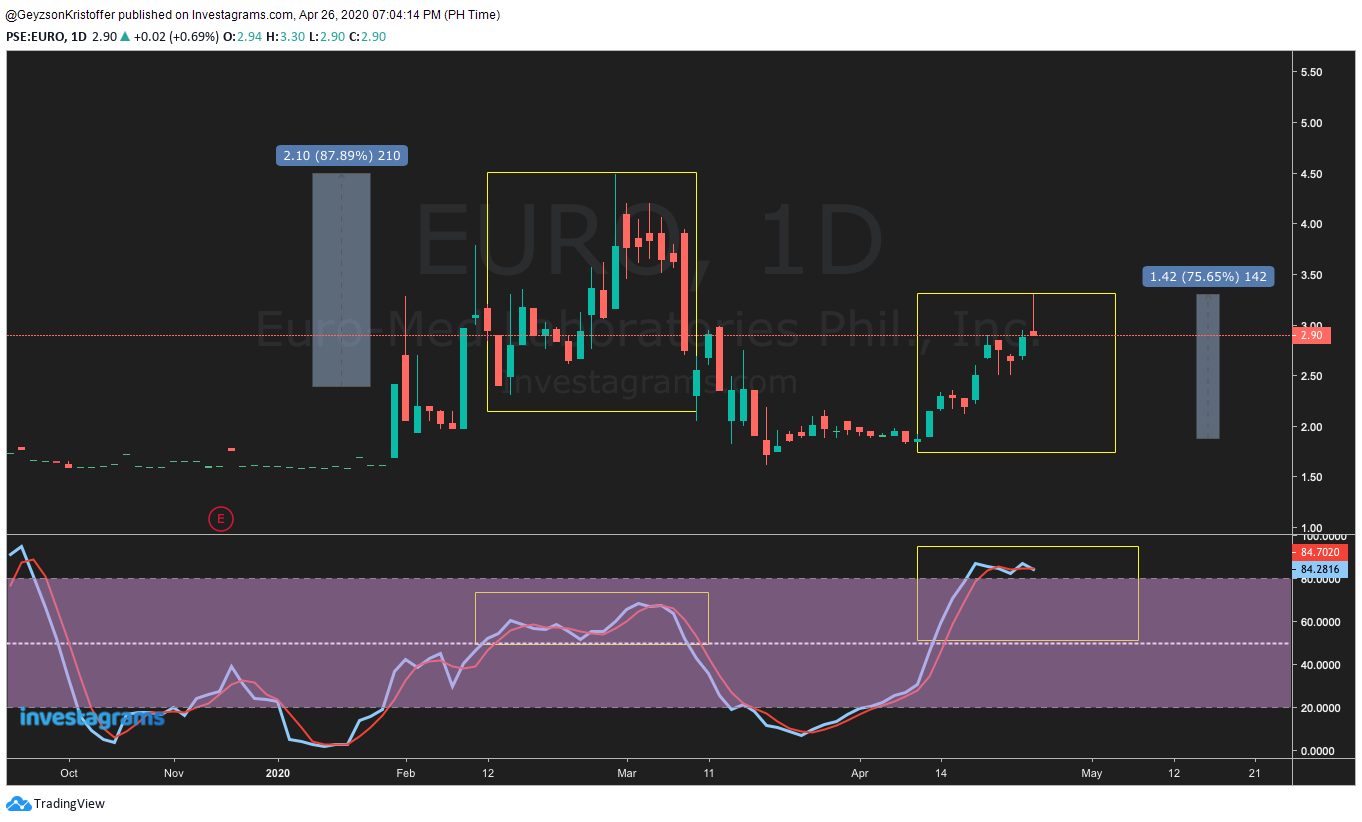 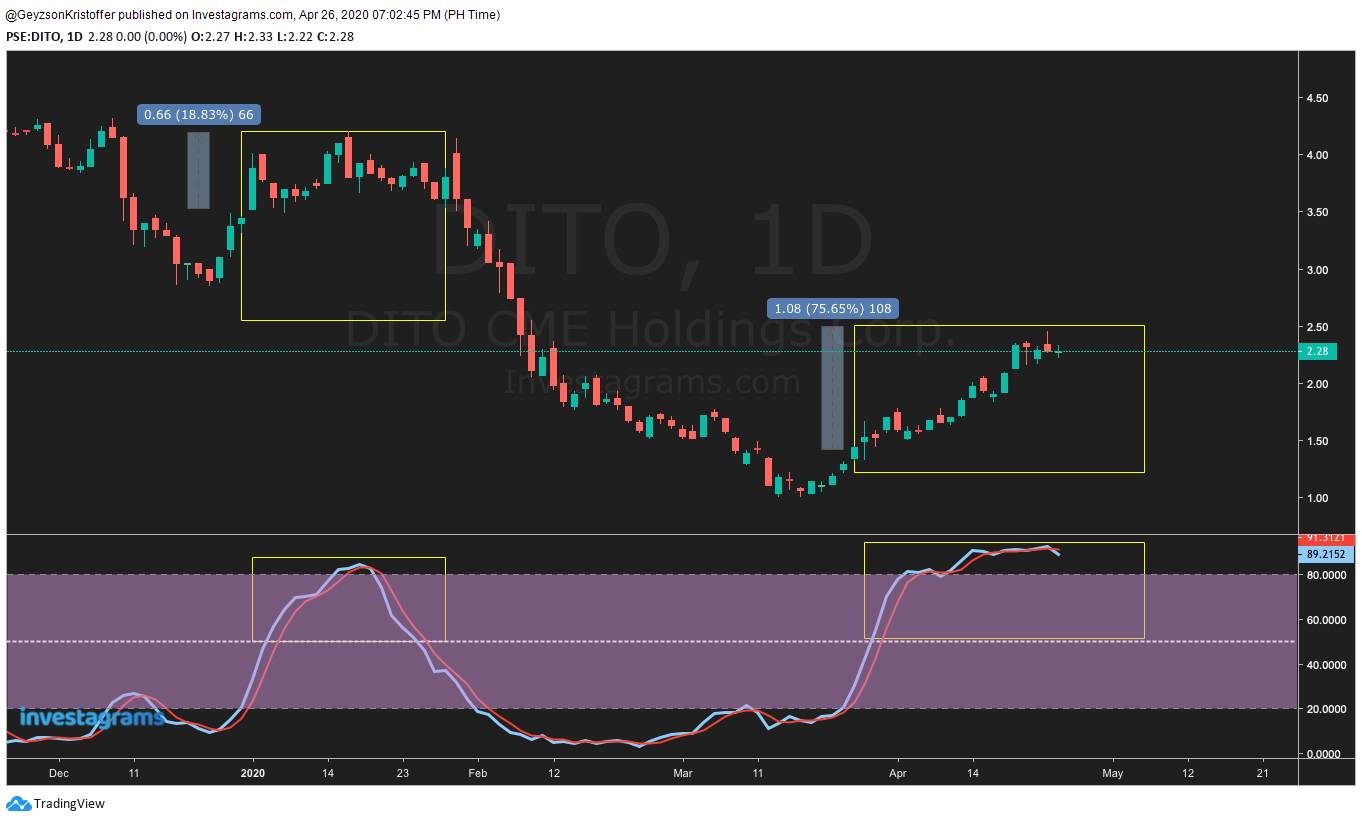 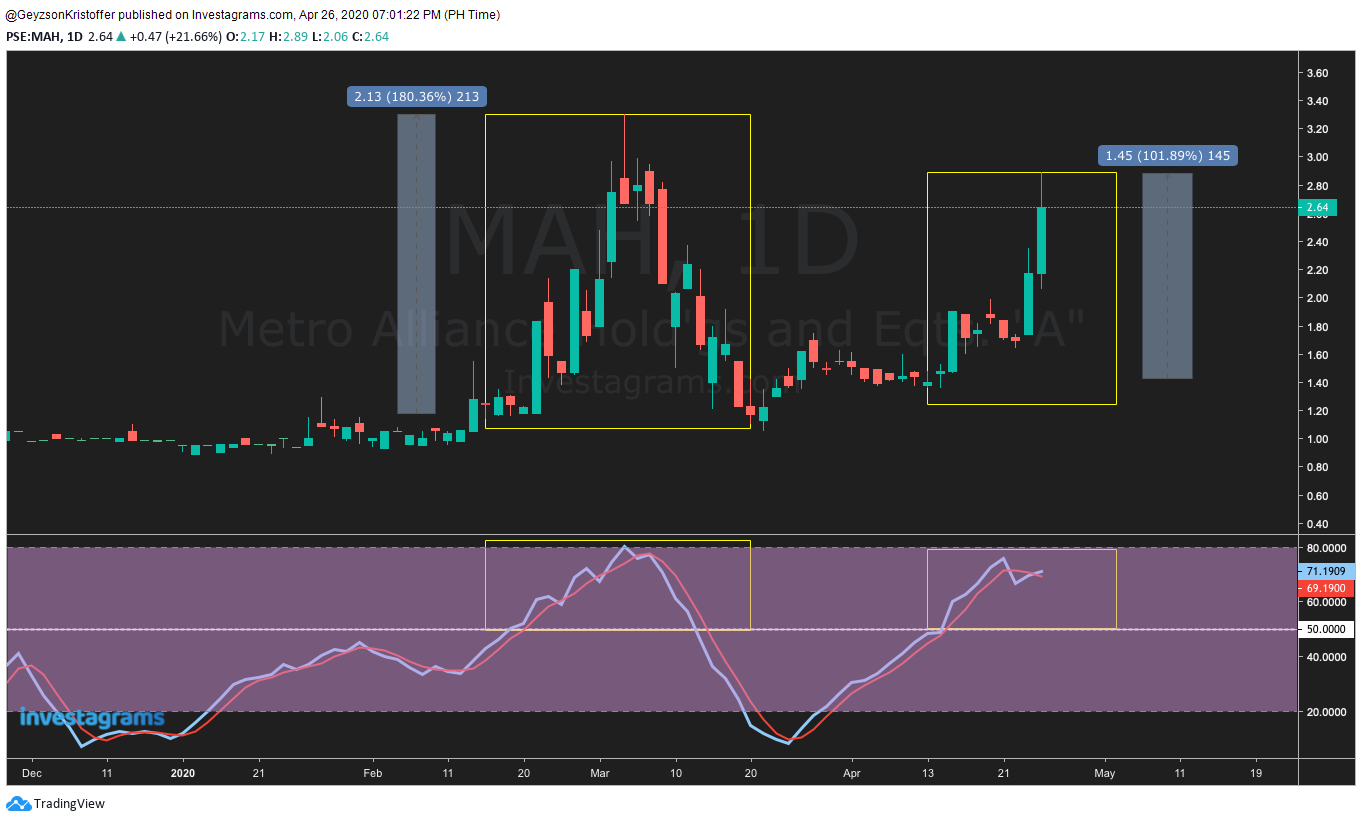 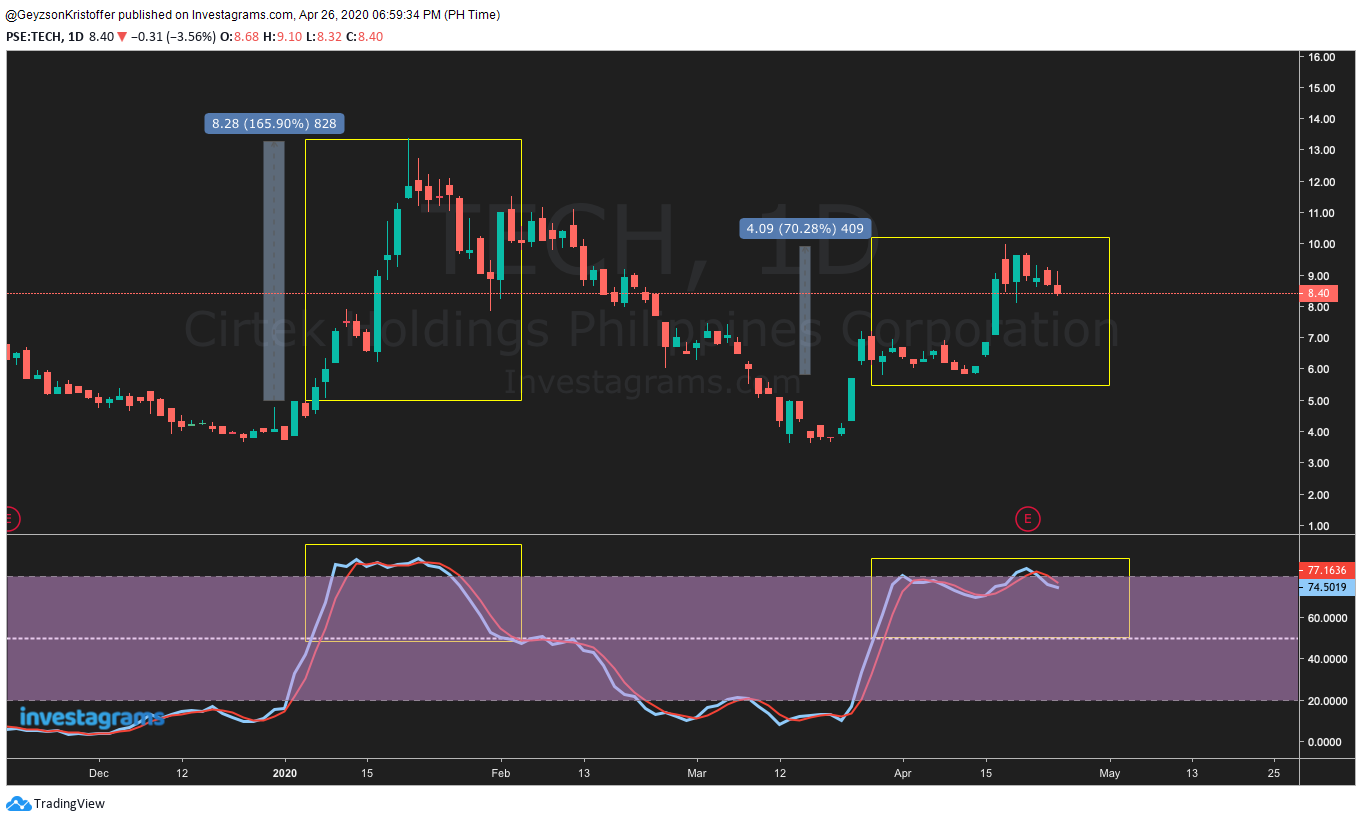 After filtering, the only thing left for you to do is to find an entry and exit trigger!

Stochastic and Stochastic RSI are strength indicators that oscillate between a period of weakness to a period of strength. To use this to your advantage, only trade stocks when their stochastic value is above 50. That will give you an assurance that what you bought has an underlying strength in it. As we all know, no indicator is fail-proof, Stochastic and Stochastic RSI are no exception, that’s why we should always use proper risk management to stay in the game and have our winners make way bigger money than our losers.

“Success usually comes to those who are too busy to be looking for it.”
– Henry David Thoreau

An Applied Mathematics graduate and a full-time teacher, Geyzson Kristoffer is a part-time trader who has been an active user of Investagrams since 2017. He spends his mornings, afternoons, and evenings learning about trading and reading books: Alexander Elder’s Trading for a Living being his favorite. Cohering to his passion and profession, he set his heart on teaching and helping newbies, but only the dedicated ones. 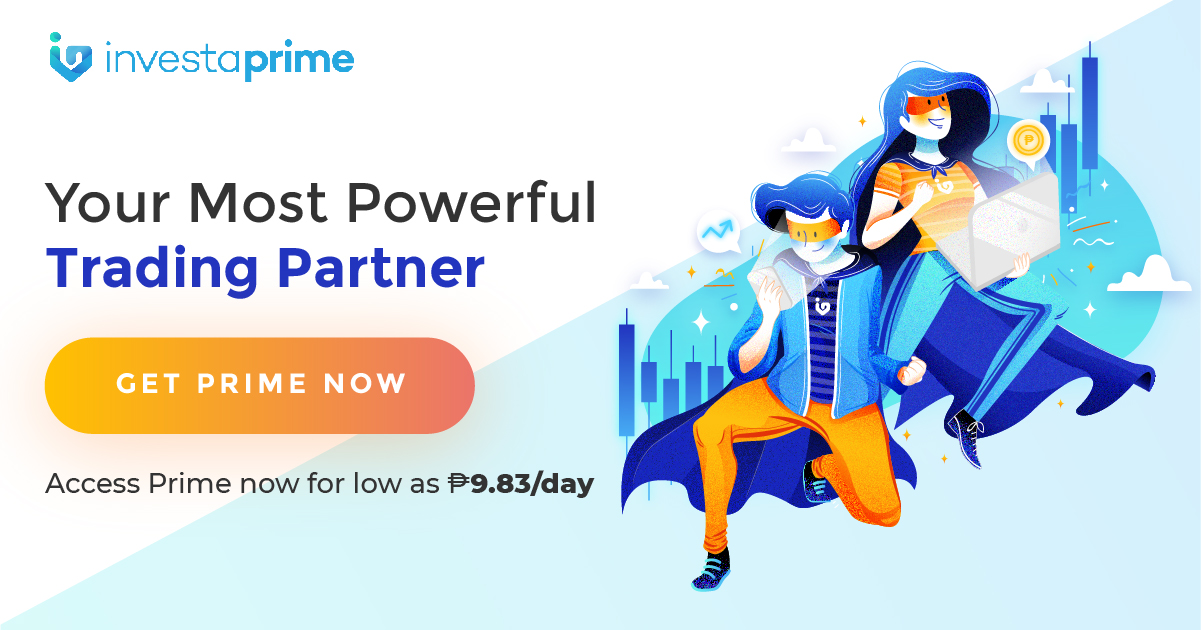 New Ways to Earn During the New Normal

Lifecycle of a Stock

Author InvestagramsPosted on September 26, 2018September 26, 2018
One of the most common reasons why people don’t invest is because they “don’t have time” to monitor the stock market....
Read More

The Importance of Backtesting

Author InvestagramsPosted on May 13, 2020May 15, 2020
As we started our trading career, our focus is all about making profits. We searched for the What, When, and Where...
Read More

Author InvestagramsPosted on October 14, 2018April 28, 2019
Competition Rules Mechanics UPDATE 1. To promote diversification, maximum exposure in a single stock can only be 1/3 or 33.33% of...
Read More

What Happens Once You Joined The Trading Cup 2019?

Author InvestagramsPosted on August 26, 2019October 26, 2019
Welcome to the Trading Cup 2019 Competition! To be considered as an official participant, you must be able to go through...
Read More