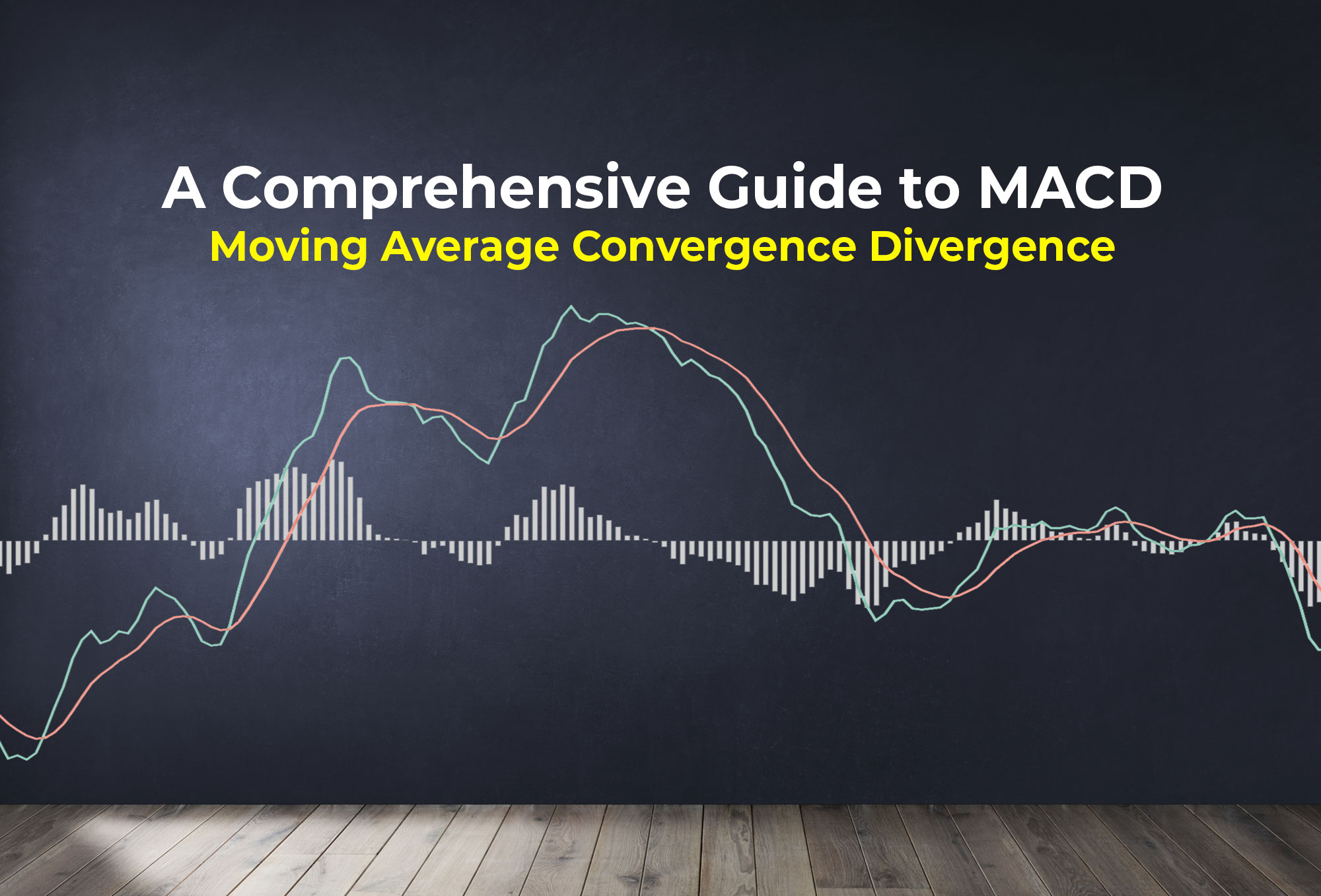 One of the most popular indicators to identify shifts or changes in trends or momentum is the Moving Average Convergence Divergence or most popularly known as the MACD (pronounced as “Mac-Dee” or spelled out by saying M – A – C – D).

MACD was developed by Gerald Appel during the late ‘70s. This indicator is also popular for its simplicity and versatility as it can be used to indicate changes, whether bullish or bearish, in trend or momentum.

How Does the MACD Calculate its Own Movement?

The standard settings for the MACD are the values 12, 26, and 9. These numbers are all Exponential Moving Average (EMA) which reacts faster than Simple Moving Averages (MA). A quick refresher, moving averages, be it simple or exponential, are both derived from the price action of a stock by computing the average price over a number of days or periods.

There are two lines in the MACD. The first line is calculated by subtracting the 12-day EMA by the 26-day EMA, the difference is then called the MACD Line. This moves faster than the other line. The 9-day EMA is left as is and is called the Signal Line. This is the slower moving line. 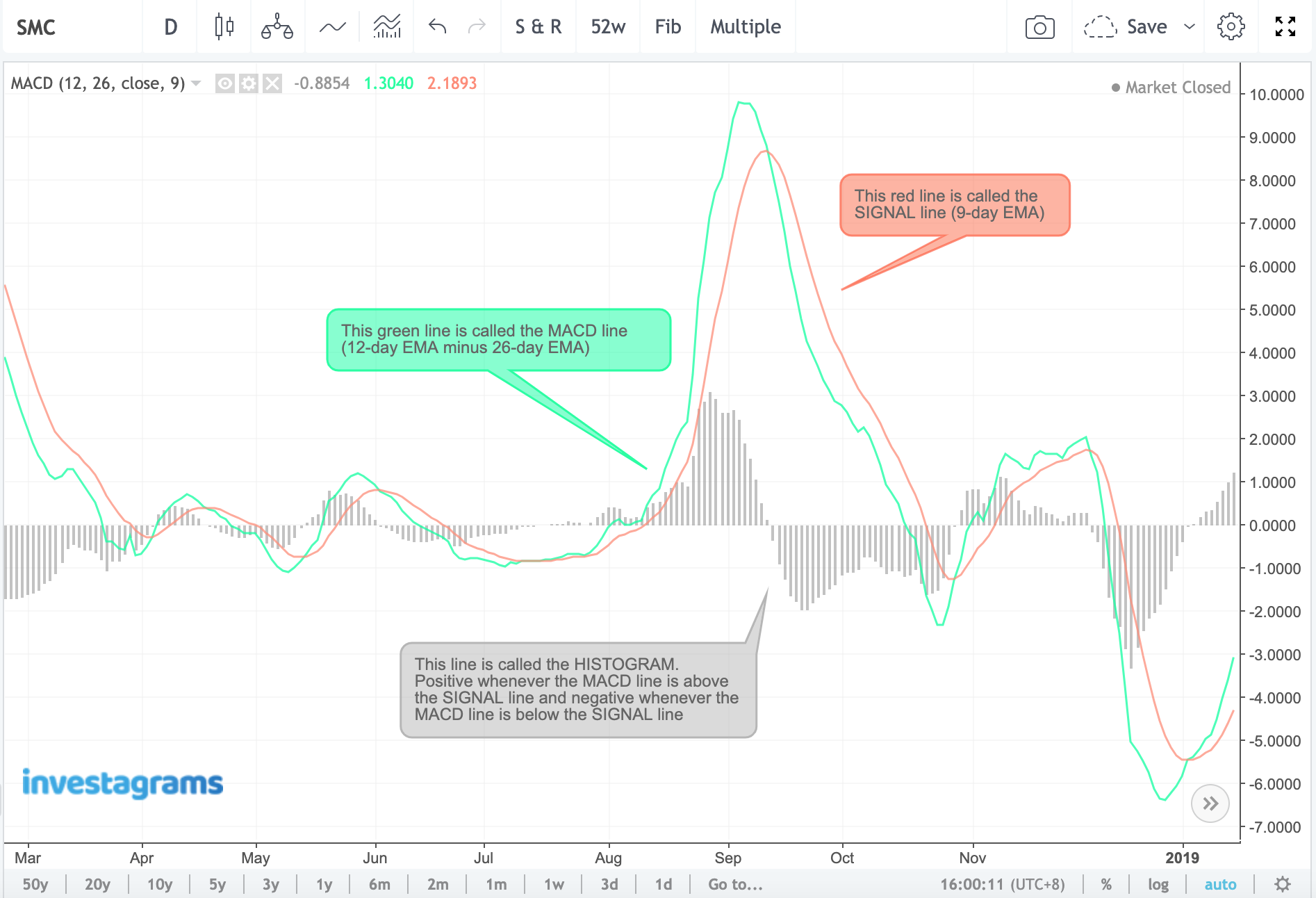 What are the strategies we can use in the MACD?

The following are the strategies a trader utilizes the MACD for:

Here’s an example of a bullish crossover:

Below is an example of a bearish crossover:

How to Use Signal Line Crossovers to Enter and Exit Your Positions?

This is where the MACD is most popularly used for. As the following examples would show, the MACD is highly effective in generating potential buy and sell signals.

In the image below for $SMC (San Miguel Corporation), we can see how the 1st and 3rd bullish crossovers effectively signaled the start of the bullish momentum for $SMC. 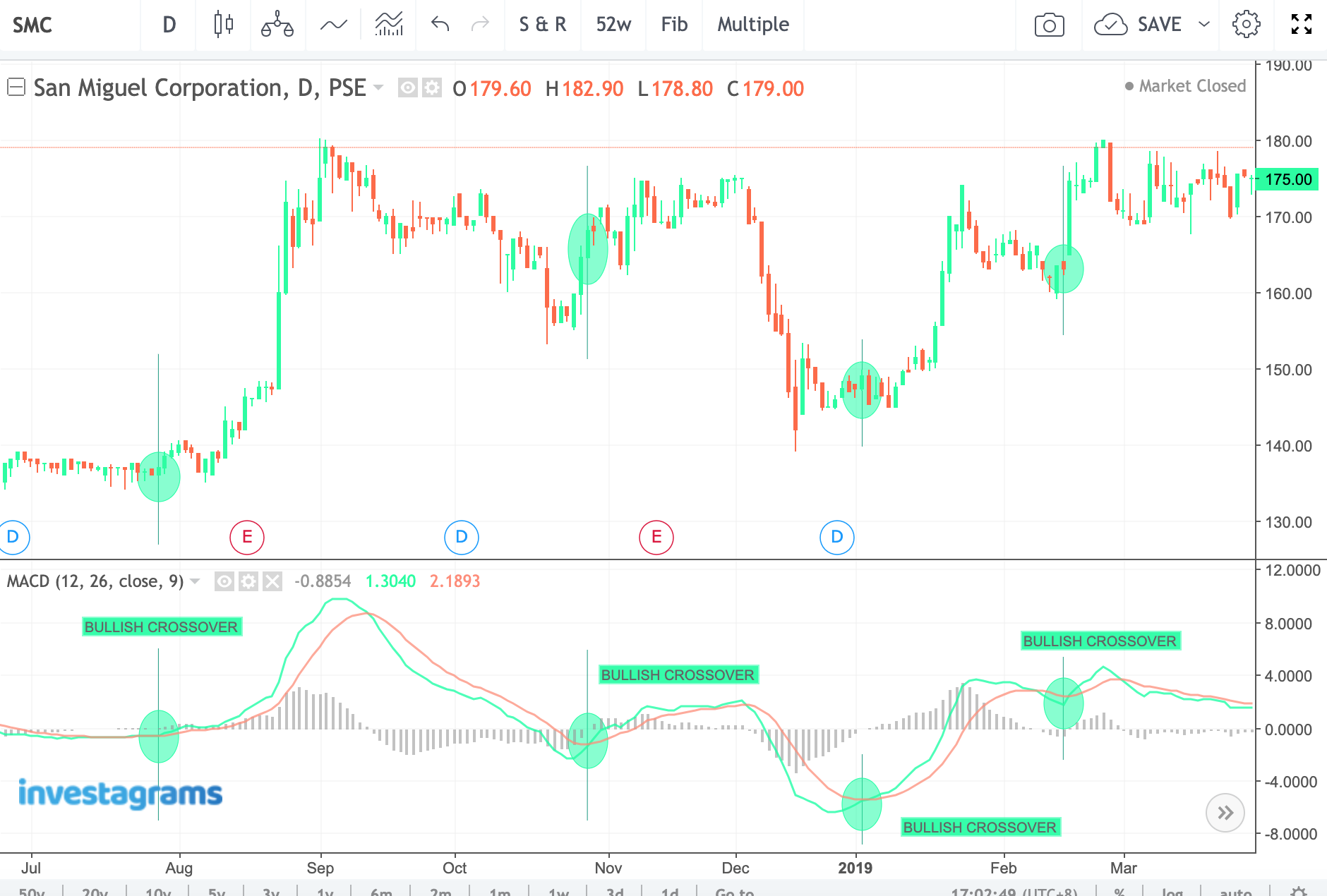 We can see bearish crossover sell signals in action for $MAC (MacroAsia Corporation). Although the signals don’t necessarily indicate the end of the uptrend, they could be used to take profit or trim down in your positions. 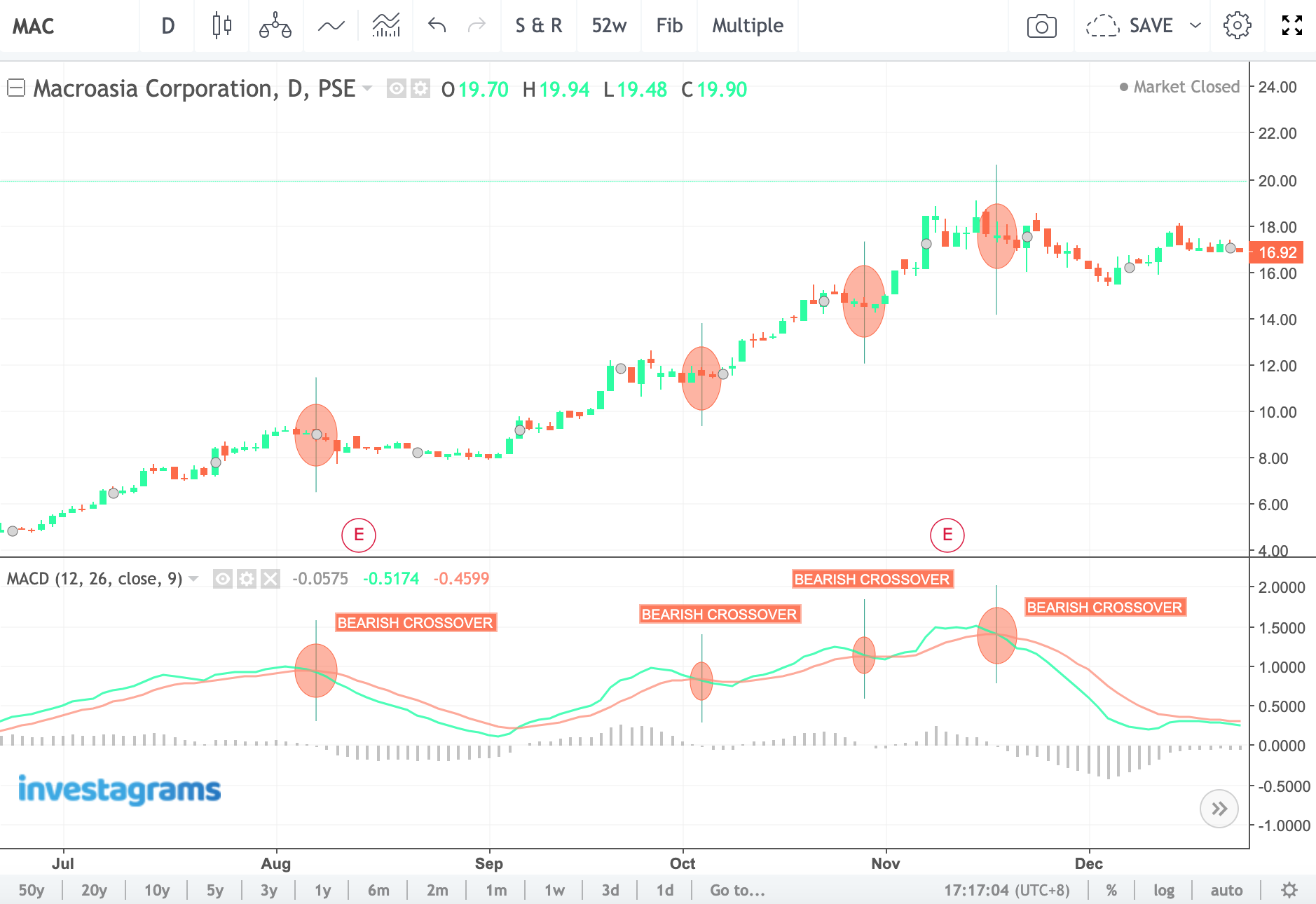 The zero-line crossover of the MACD can also be used to confirm changes in momentum and emergence of new trends. This crossover happens when the MACD Line crosses below or above the 0 line of the MACD.

The MACD Line is the green line below. We can see how effective it was in generating momentum signals for $TECH (Cirtek Holdings Philippines Corporation). A possible buy signal could have been generated whenever the green line (MACD Line) crosses above the 0 line and a possible sell signal could have been implied whenever the MACD Line crosses below it. Keep in mind that you don’t need to use the MACD’s Histogram in this strategy. 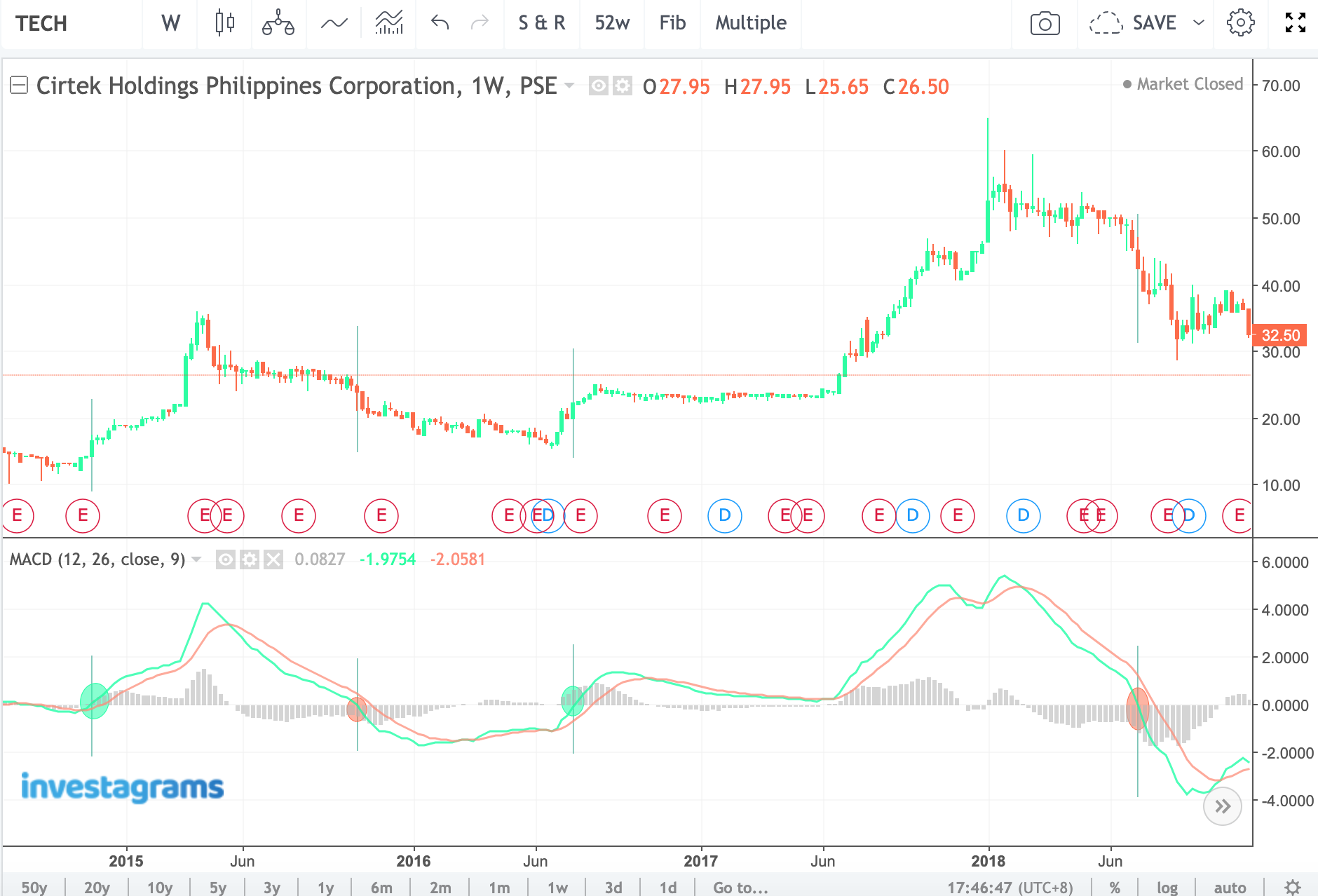 Like the RSI and other momentum indicators, the MACD could be used to spot bullish and bearish divergences.

A bullish divergence happens when the MACD creates higher highs whilst the price action or the candlesticks make a lower highs. This indicates that there could be a bullish reversal within the stock.

A bearish divergence is just the reverse of it. It happens when the MACD creates a lower highs but the price action makes a higher highs, indicating a weakening bullish momentum.

Here’s an example of a bearish divergence. $MEG (Megaworld Corporation) created a higher high but the MACD created a lower high. If you would notice in the right part of the chart, selling momentum overwhelmed buying. The MACD also went into the negative region. 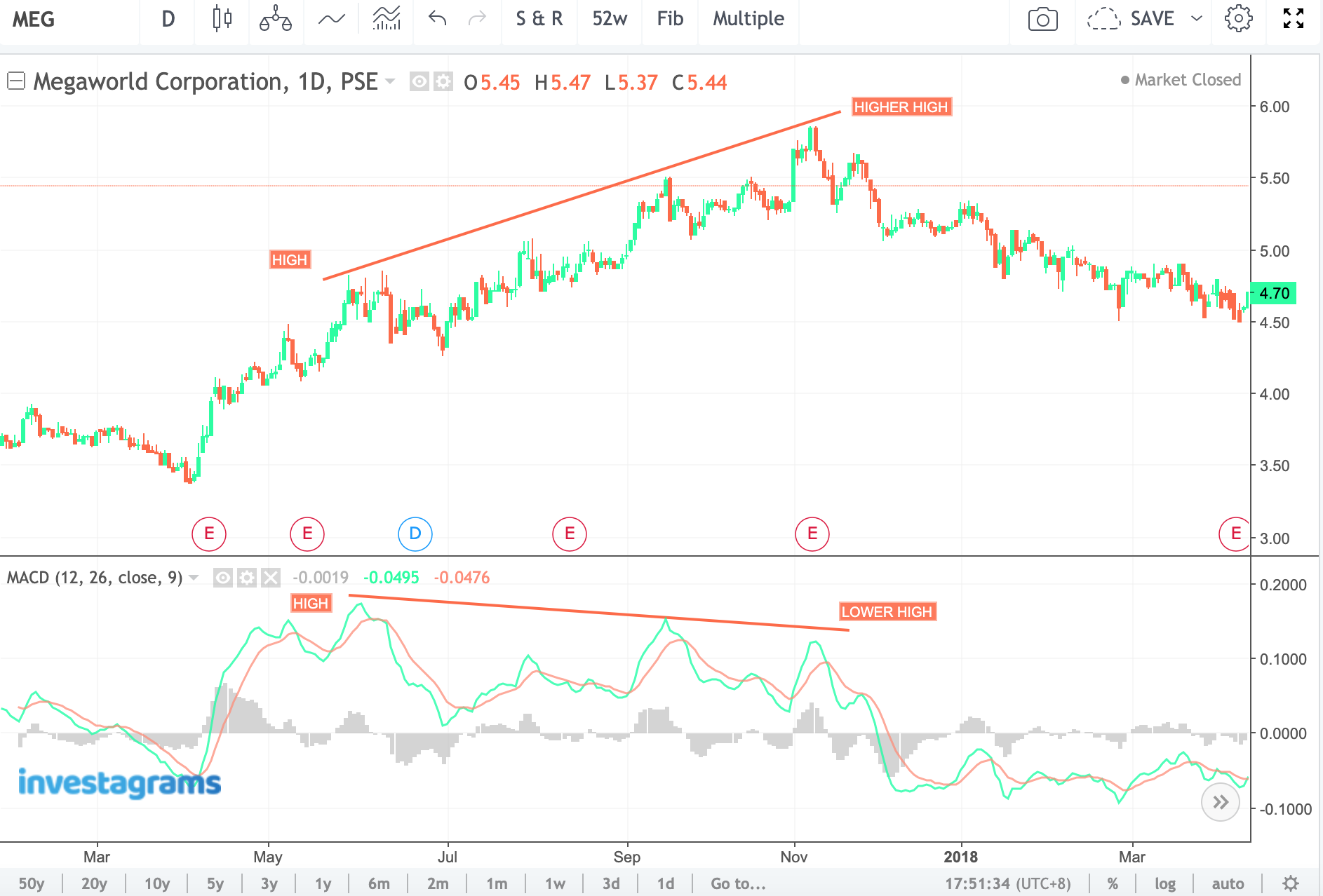 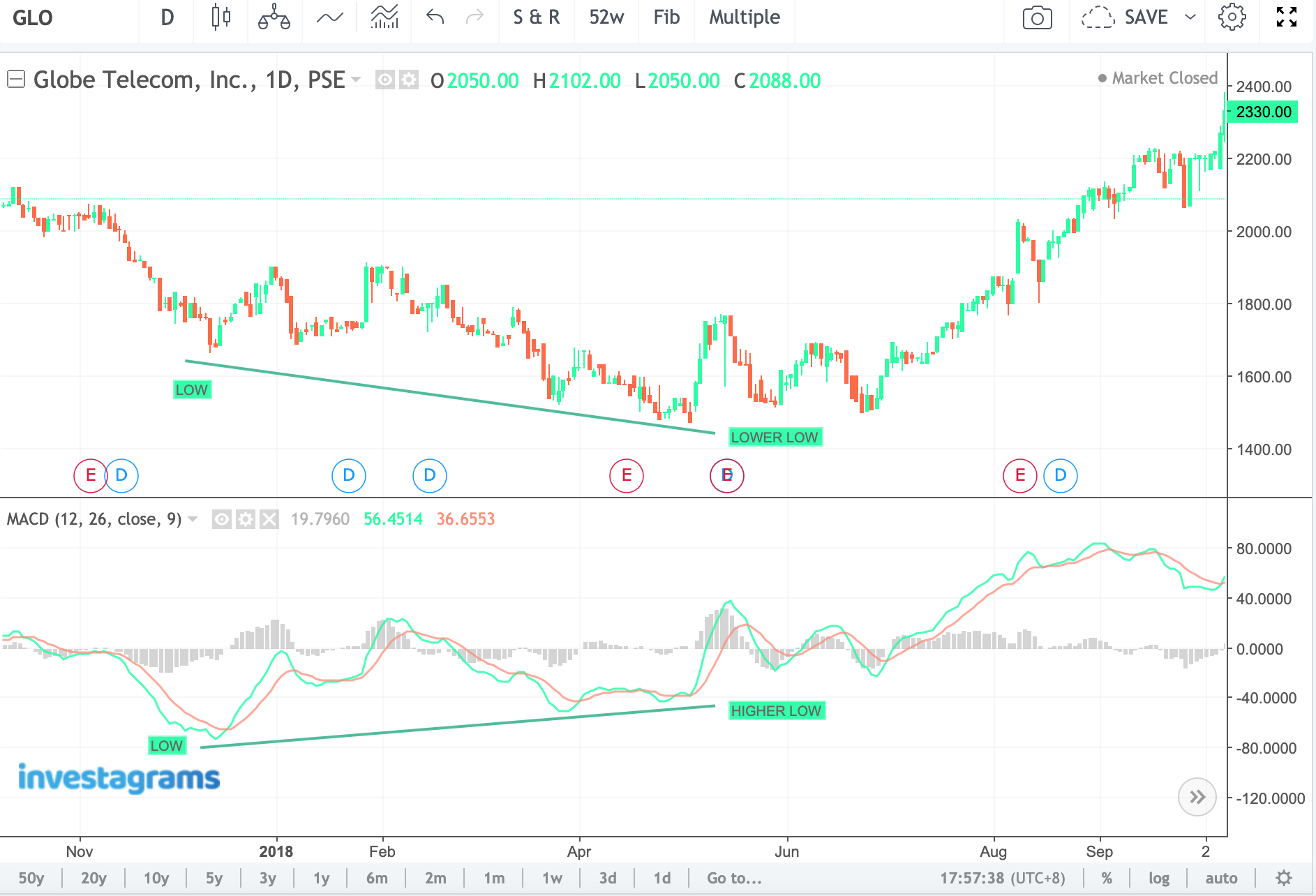 The Histogram can also be used to foretell divergences or changes in the trend or momentum of a stock. There are two divergence strategies that can be used from the Histogram: Peak-Through and Slant Divergences.

These are formed when the Histogram creates “peaks” (highs or lows) that diverge from what highs or lows the price action creates and later crosses over or goes “through” the 0 line. They can be either be bullish or bearish Peak-through divergences.

Here’s an example of a Peak-through bullish divergence in $MBT (Metropolitan Bank & Trust Company). The MACD Line and the Signal Line was removed here to highlight the peaks of the Histogram.

As you can see below, after $MBT made a lower low, the MACD Histogram signaled that the selling momentum was weakening by creating a higher low peak followed by going through the 0 line. The stock went on to create a higher low in price as seen on the right part of the chart. 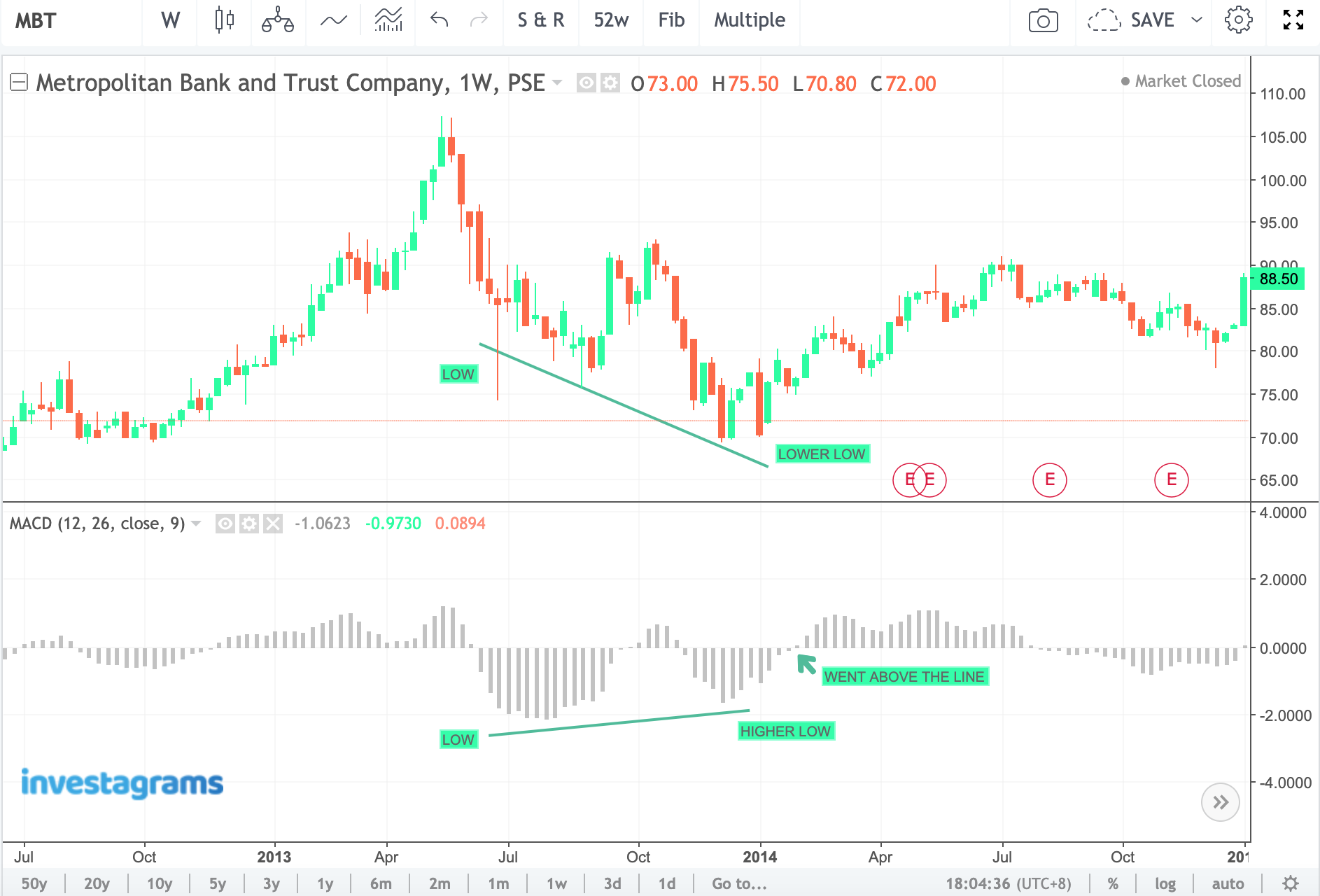 Bearish Peak-through divergences are just the inverse of its bullish counterpart. We can see how there was an impending sell off days after $ABS (ABS-CBN Corporation) created a higher high in the chart below. 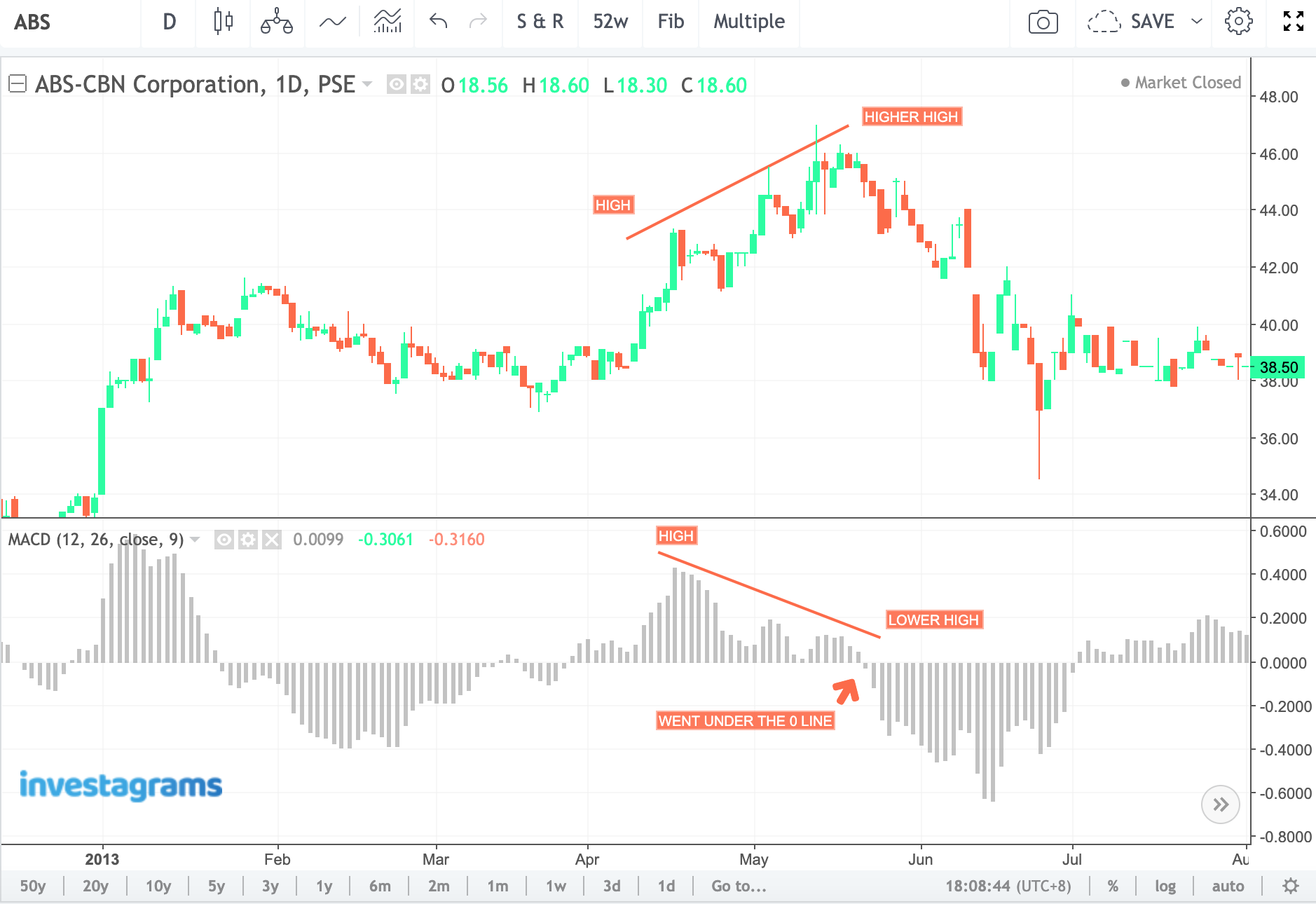 These are simply slants that do not need mountain-like peaks that peak-throughs have. The Histogram should slowly display lower lines as it moves towards the 0 line to signal a possible shift in trend or momentum. The Histogram expands when the MACD Line noticeably moves away from the signal line, indicating a strengthening trend or momentum. The inverse happens when the MACD Line moves closer towards the Signal Line. 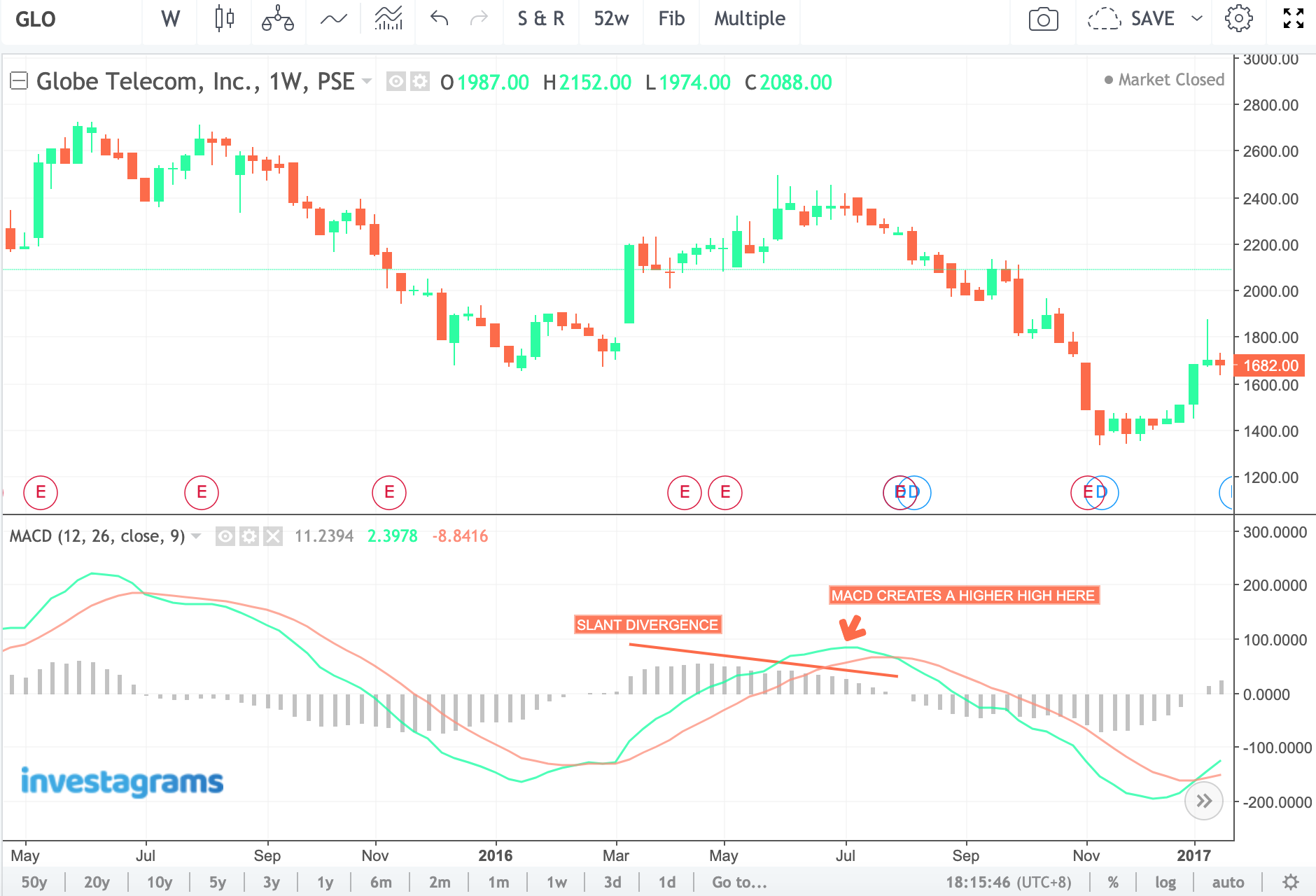 A bullish slant divergence can be seen in the chart of $MEG (Megaworld Corporation) below. It indicated a possible shift from selling pressure into buying pressure as the MACD established a lower low (even earlier than the bullish crossover that transpired). 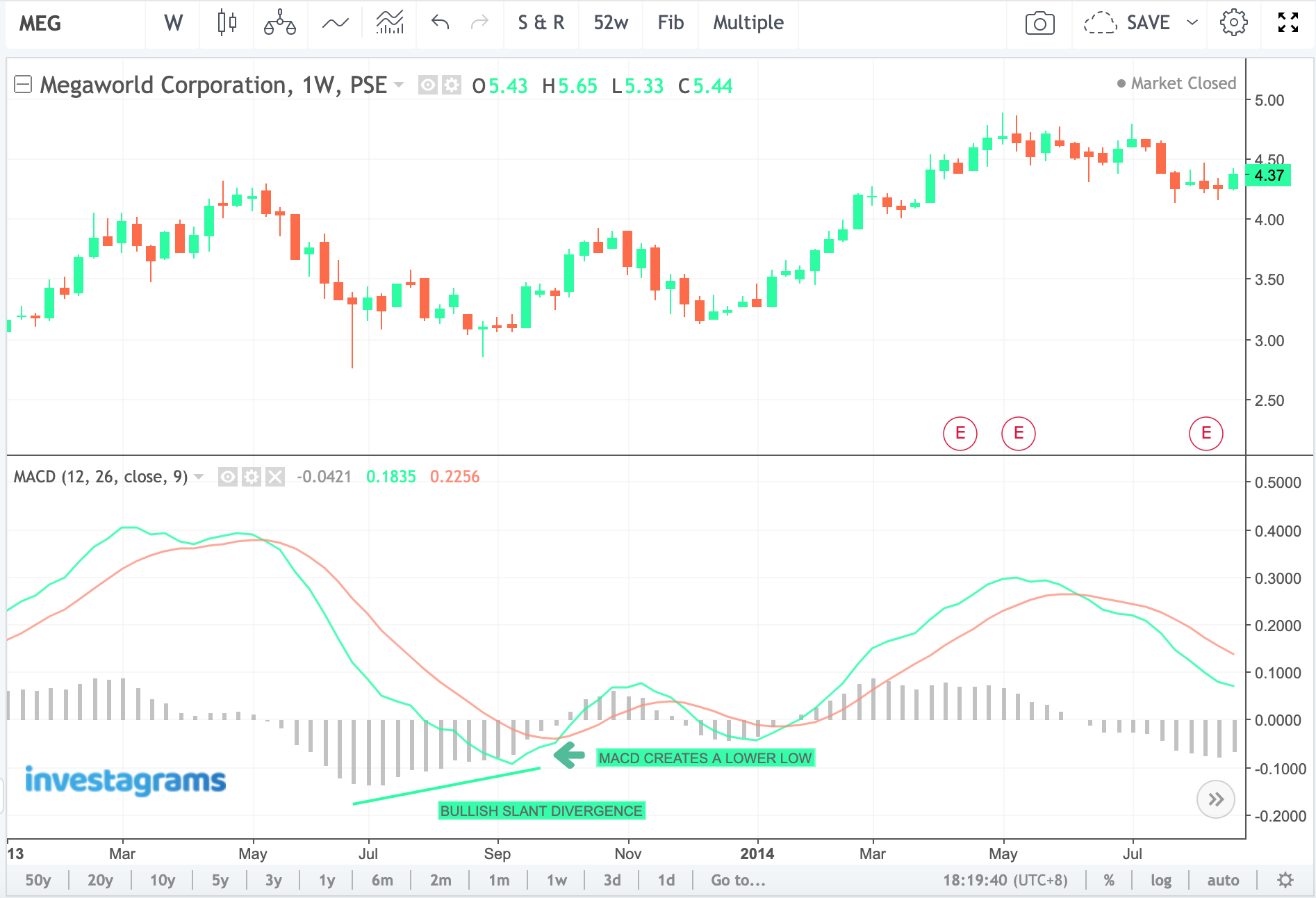 The MACD is a reliable technical indicator that beginners can use in the Philippine Stock Exchange and other kinds of markets. The best way to use the MACD is when the stock is trending. A non-trending (moving sideways) stock is susceptible to false or even pre-mature signals that the MACD generates. Divergences that take place during a short-period are less effective compared to divergences that took a longer period to generate a possible buy or sell signal.

Continuously back-test the MACD if you want to integrate it in your approach in the market. The MACD does not guarantee you gains in the market. Like any other indicator, it only adds probability in your trading bias. Fear of Missing Out: A Trader's Worst Enemy

Get Out of the Rat Race and Pay Yourself First

Why Financial Education is Important to Filipinos?

Author InvestagramsPosted on October 22, 2018October 22, 2018
Few days ago, the most awaited Ultralotto Jackpot which made aspiring billionaires Filipino hyped for quite several weeks was won by...
Read More

Millennials and The Stock Market

Author InvestagramsPosted on November 10, 2018November 10, 2018
According to Pew Research Centre, Millennials are people who are born between 1981 and 1996, and they’re the first generation to...
Read More

Investagrams Mobile Upgrades: Everything You Need to Know

Author InvestagramsPosted on January 27, 2019January 28, 2019
Our users are always our number one priority here at Investagrams and every decision that we make is customer inspired, user-focused,...
Read More