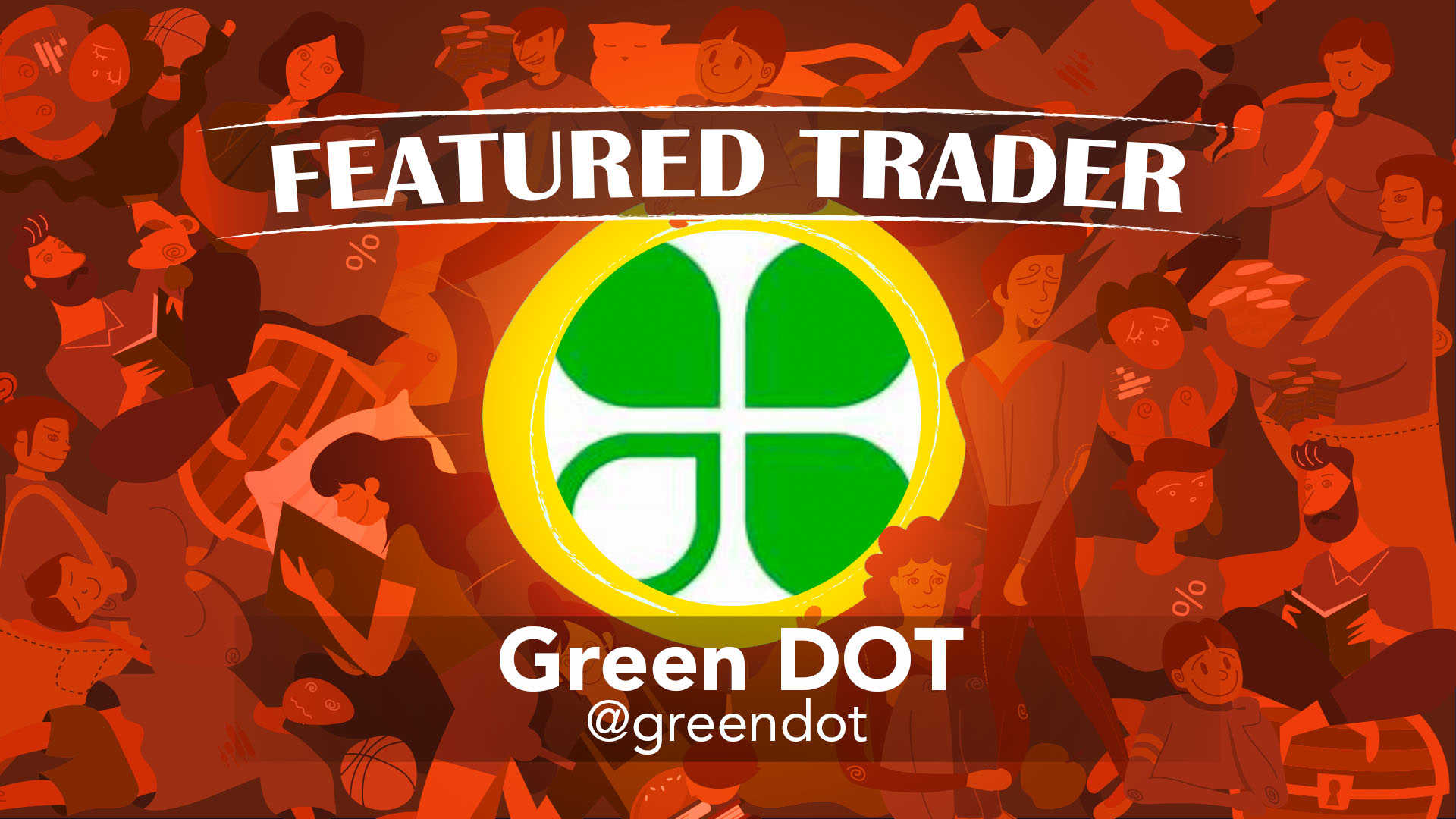 Since the Philippine market has been lagging compared to various financial markets across the globe, it is a limiting belief that the local market is enough to amass the limitless opportunities in the markets. The global markets offer several asset classes along with the ability to short, leverage, and margin as part of your trading arsenal.

For our featured trader for the week, we will be showing you how he was able to spot Advanced Micro Devices, Inc. or $NASDAQ:AMD. Green DOT a.k.a. @greendot is an active member of the Investa Community who continuously spreads his knowledge, insights, and expertise in both the local and the global markets. 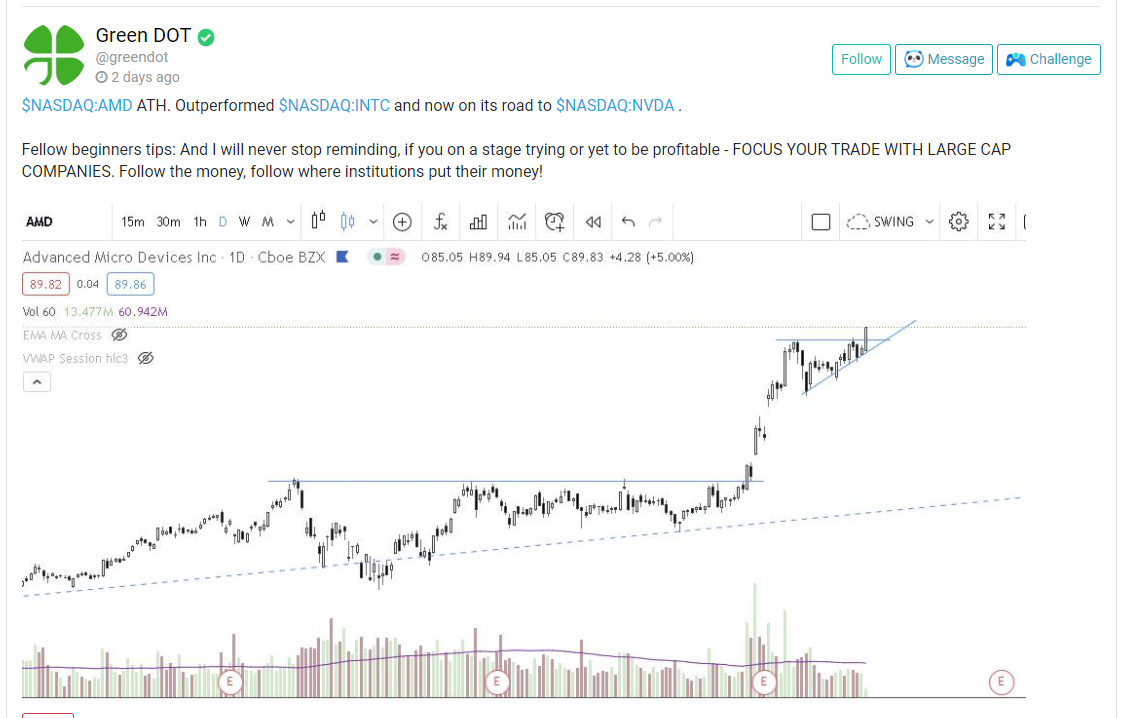 Technical-wise, $NASDAQ:AMD price structure represents a picture-perfect trade setup. It first formed a cup and handle formation. The handle of the said pattern is indeed long, yet it is ideal for a stock or any asset class to form a proper base to further amplify its probability for a strong and massive breakout. 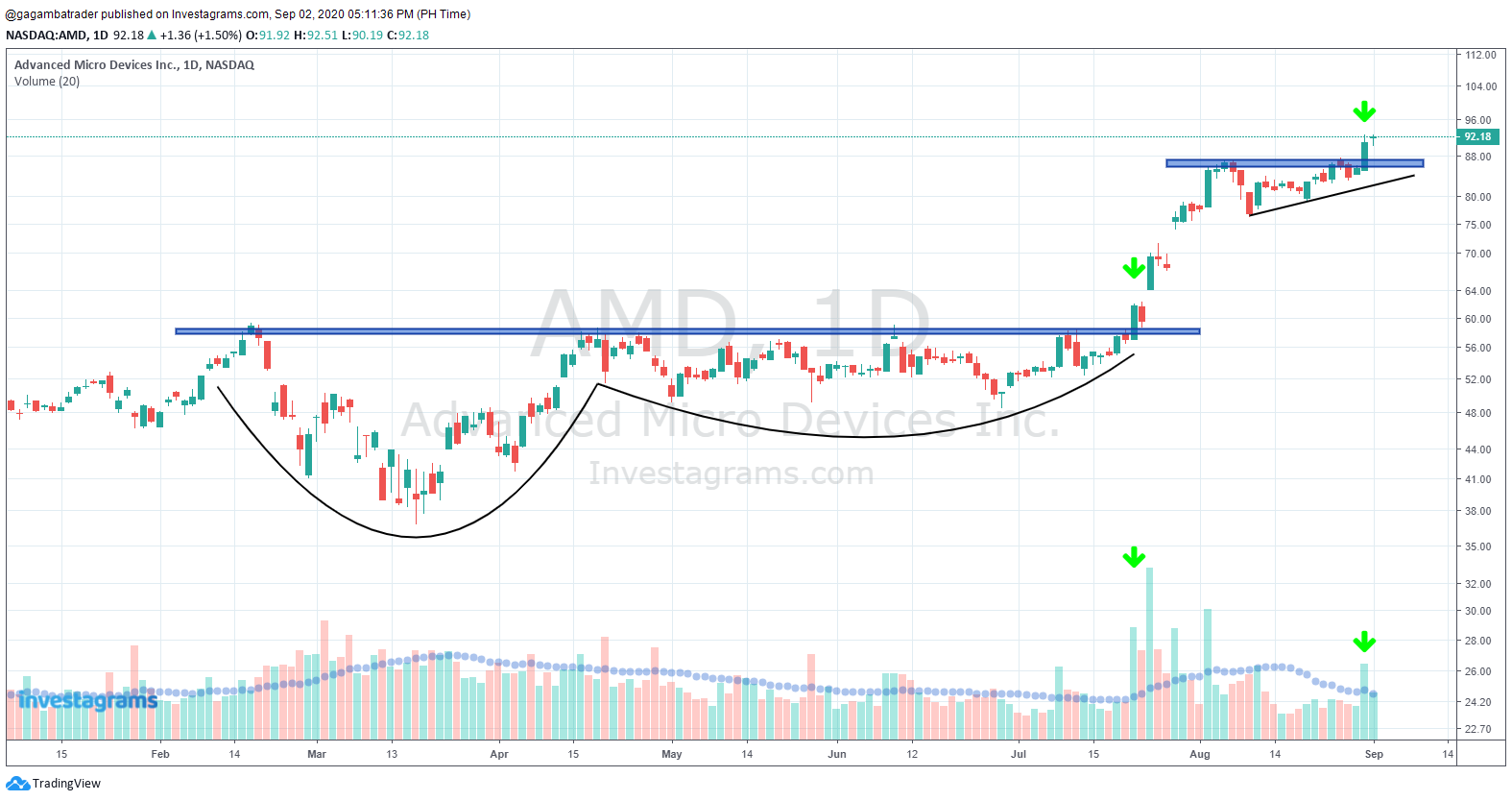 The base at the handle area was supported with dried-up volume. When it managed to breakout of the said base, the up move was supported with massive volume. During its formation of the Ascending Triangle pattern, the formation was also accompanied by dried-up volume, and once it broke out of the said pattern, the up move was also backed with immense volume. $NASDAQ:AMD must at least sustain the $80 levels to further assert its ascendancy.

The ability to spot resilient stocks despite the noise concerning various opinions regarding the future of the US Stock Market is the key to truly function as an independent operator. The bottom-up approach is the way to lead you to potential market leaders despite the performance of the overall indices. That is an approach that is hard to stomach in but is essential to your growth as a trader.

Congratulations to those who were able to maximize the monstrous move of $NASDAQ:AMD. Lastly, kudos again to Green DOT a.k.a. @greendot for sharing his execution. Your FREE 1-Month InvestaPRO access is on its way!


READY TO LEVEL UP YOUR TRADING?
Join the #InvestaCup2020 and have the chance to become the Champion of the Biggest Trading Competition in the Philippines.

How to Fast-Track Your Trading Journey Towards Consistent Profitability

How Important is Reflecting on Your Trades?

Author InvestagramsPosted on January 5, 2020January 5, 2020
For the past three years, we have been hosting the BIGGEST stock trading competition in the Philippines with the goal of...
Read More

Author InvestagramsPosted on April 8, 2020April 8, 2020
When Investagrams was just starting out, the social feed was full of analyses of countless traders on different charts. But through...
Read More

Author InvestagramsPosted on June 28, 2019
Today, only a few have lived to tell the tale of how they survived the 2008 stock market crash. Even fewer...
Read More

Author InvestagramsPosted on March 24, 2019July 8, 2019
OVERVIEW Welcome to the third year of Investa Trading League! Today we present to you another GREAT OPPORTUNITY to hone your...
Read More