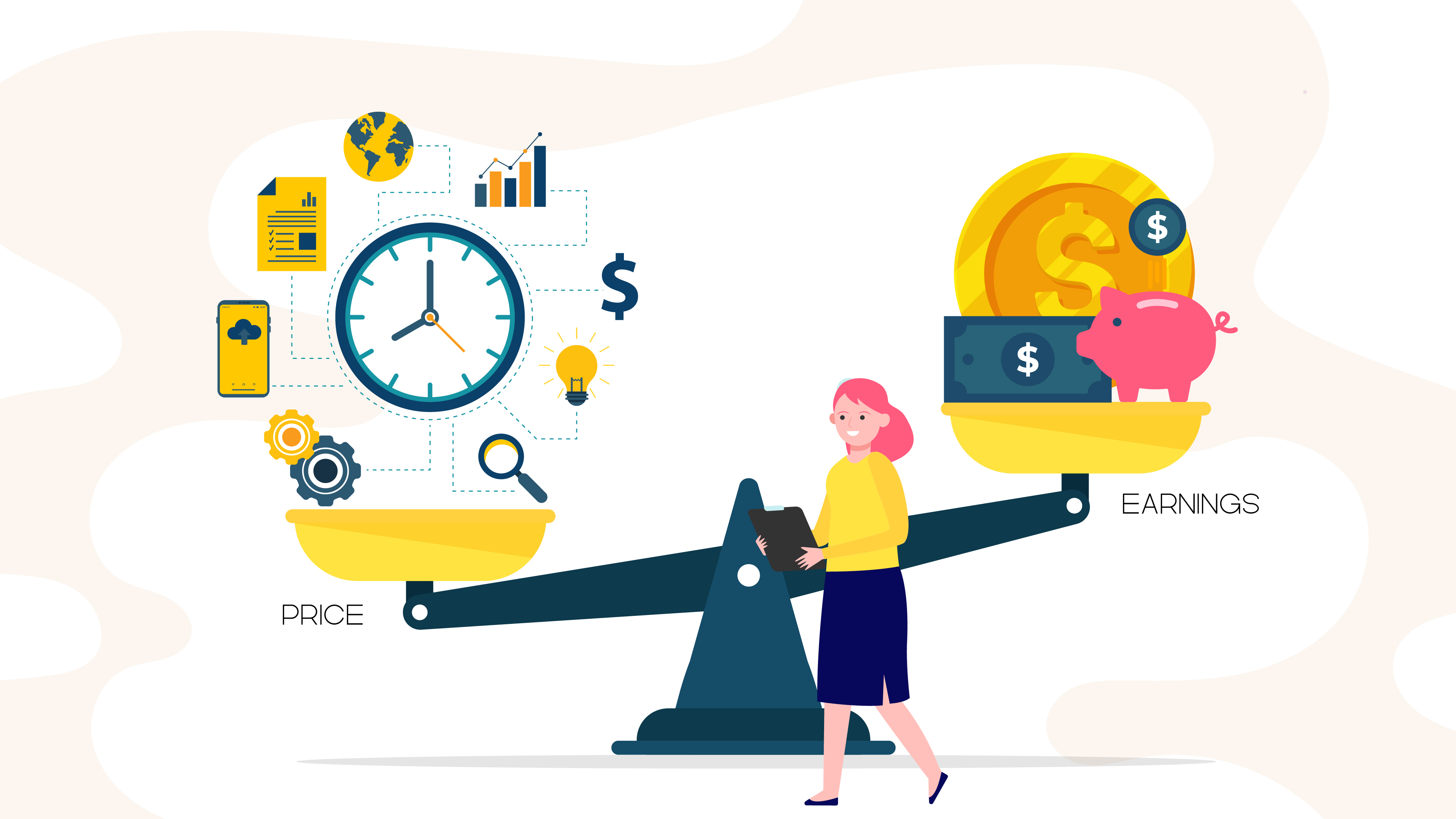 As a newbie or beginner in the finance industry, some of us have encountered ‘Price to Earnings Ratio’ or commonly called P/E Ratios and wondered what does it mean and how does it help in our investing research.

In this article, we will discuss and give you the foundation of Price to Earnings Ratio including some examples that you might need for reference. Let’s start!

The Price to Earnings Ratio is commonly used by investors to get a quick idea of how the market values a certain company.

It is a ratio for valuing a company based on its current share price relative to its per-share earnings. It is also called the price multiple or the earnings multiple because it shows how much investors are willing to pay per dollar of a company’s earnings.

For example, if a company’s P/E Ratio is 10, then an investor is willing to pay 10x for every P1 a company earns. It is more so a way to recognize how the market currently perceives a stock than its actual valuation, as it takes into account the market price. It gives a glimpse into how investors view or value a certain company, and helps determine a company’s market value as it shows what the market is willing to pay for a stock based on its past or future earnings.

Two types of P/E ratios are commonly used: Forward and Trailing P/E. The Forward P/E ratio uses future earnings as guidance, hence why it is also called “estimated price to earnings”. Figures used are predictions of future earnings, and this ratio is useful if you want to compare present earnings to future earnings. The Trailing P/E, on the other hand, relies on past performance and the company’s earnings over the past 12 months. Compared to the Forward P/E, it is more objective, as the figures are factual rather than predictions.

The P/E Ratio is best used when making comparisons, either between different companies in the same industry or against the company’s own historical records. The P/E ratio standardizes stocks with various prices and earning levels, making it easier to compare various stocks.

A high P/E ratio suggests that investors are expecting a higher earnings growth in the future, because at present, people are willing to pay more per share. It means that the price is much higher than the EPS, suggesting that the market values a certain company greatly, indicating positive future performance and high growth expectations. However, it is not always a good thing, as a company may be overvalued or may not be able to deliver on the high expectations. As such, investing in a company with a high P/E ratio is considered a riskier investment. On the other hand, low P/E ratios suggest that a company may be undervalued, meaning that at the moment, it is a good bargain. Investors can opt to buy now and reap profits in the future, when the stock price goes higher as a result of the market correcting it. If a company is experiencing losses or has no earnings, its P/E ratio will be posted as N/A because the earnings fall below or are equal to 0.

Company A and Company B

By standardizing the prices using the P/E ratio, we can see that Company A is valued much higher than Company B. As an investor, you could buy Company B now at a bargain because the market is undervaluing it. Another choice is to invest in Company A because investors are confident in its future growth, though it is more risky of a choice.

Company C and D both trade at P40 per share respectively. This does not mean that they have the same value and potential for growth; let us use the P/E ratios to get a more conclusive answer.
Let’s say that company C earned P20M for the fiscal year, and have 5M shares outstanding. This would make their EPS P4 per share. Plugging that into the P/E formula, the P/E ratio would be at P10, meaning that investors are willing to pay 10x per P1 earned.

For Company D, let’s say that they earned P30M for the fiscal year and have 6M outstanding shares. Its EPS would then be P5 per share. Plugging that into the P/E formula, the P/E ratio would be at P8, meaning that investors would pay 8x per P1 earned.

By using P/E ratios, we see now that though their market price may be at the same level, it doesn’t mean that their underlying value is the same. By being aware of these ratios, we can make choices that are better suited towards what we want to get out of our stock choices.

As a last note, it is important to remember that there are no set rules when dealing with P/E ratios. The P/E ratios could mean various things depending on the industry or other factors. It is necessary to use these ratios along with taking into account market conditions and world events.

Author InvestagramsPosted on May 27, 2020May 27, 2020
The market has recently seen a decline in opportunities, but the grind still goes on. For this week, we would like...
Read More

Author InvestagramsPosted on June 18, 2020June 18, 2020
For this week, we would like to congratulate our Featured Trader: Apo Lakay Cassandra a.k.a. @bassitalakay! Recently, our markets have been...
Read More

Author InvestagramsPosted on May 19, 2020June 4, 2020
Have you ever wondered when you first started trading in the financial markets on whether a golden indicator and strategy exist?...
Read More